Elantris and the Snow Queen and Oil, Oil, Oil.

ust finished Brandon Sanderson’s first book, Elantris and I thoroughly enjoyed it. If anyone comes up with different types of magic, he certainly does. His characters and worlds are both well built and engage the sympathy of the reader. I think I have now read everything he has written and have always enjoyed the books – of course he is involved in finishing the Wheel of Time books begun by Robert Jordan, now deceased. I read one of these new ones so far – there will be three – and found it to an excellent follow up for Jordan’s work.

I am now well into one of Mercedes Lackey’s books

about the Five Hundred Kingdoms which are watched over by Fairy Godmothers who’s job it is to work with “The Tradition” and try and make sure that no sad events occur because The Tradition thinks that’s how a story should enfold. For instance, in one story, there was a Cinderella character but no prince of a suitable age for her to marry. In the end, one of the fairy godmothers took her on as an apprentice. Its a fun way of dealing with the fairy stories we grew up with. My current book is called The Snow Queen which is a turn around of the story we all know but is almost a background to other things which are happening. I have read several of these books and enjoyed all of them. Somewhat different writing from Mercedes Lackey, but fun.

There was an interview with the CEO of British Petroleum this morning and he says the actual oil rig explosion was not their responsibility as the rig was owned and operated by another company, but they accept full responsibility for the oil and all the legitimate costs associated with it. There is a new method under way for getting at the oil source and they are hoping to get this done within the next 6 days. It involves drilling down and then along to the oil source. I tried to find a diagram as shown on GMA today, but cannot do so. I was wrong when I said they could send divers with special equipment, it is deeper than we thought, close on a mile.

We had a good evening with our friends on Saturday and ate well and talked a lot. They recently went to Vegas with a view to going out on the Sky Walk over the Grand Canyon which they did and we looked at the album with all the pictures. Apparently you are not allowed to take anything onto the Sky Walk and you have to wear shoe covers so you don’t scratch the glass. Naturally you cannot take your own pictures.

As a change from asparagus, here is a mushroom recipe which came from Mushrooms Canada’s regular email. 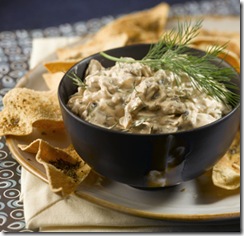 In large skillet melt butter over medium heat; stir in mushrooms, lemon juice, garlic and onions sauté until tender and the liquid given off by the mushrooms has evaporated, about 5 –7 minutes. Reduce heat to simmer; mix in sour cream, dillweed, paprika, salt and pepper and simmer until slightly thickened and warm.

Baked Pita Crisps: Cut 2 whole wheat pita breads in half horizontally with scissors or serrated knife. Cut each half into 8 triangles. Arrange in single layer on cookie sheet; bake in 400ºF(200ºC) for 8-10 minutes or until lightly browned.