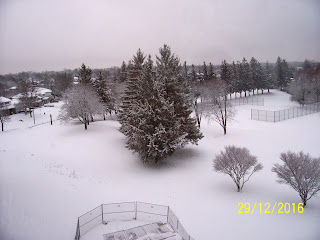 Having arisen on time and got ourselves ready to go for my ultrasound, we decided there was really too much snow. The lab is in the middle of all the road works that are going on here and, although some of it is finished, finding our way there would still be a tad difficult, especially in the snow. I phoned and they quite understood and re-booked me for next Wednesday. So then I was stuck with not much to do. Not enough time to make some dishes I want to do so I decided to read for a while. Matt went to sleep!!! Eventually, we had lunch and then headed out to the bowling alley which is a much easier trip and the roads were a lot better by then. 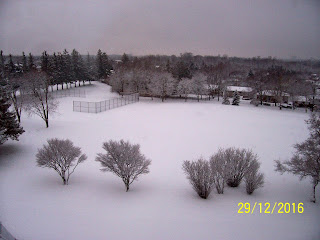 It struck me as rather odd that one side of the roads round our building and park were almost totally clear but the right hand side, for us, was still white. Presumably there had been more cars coming our way than going. When we got to the alley there was only one other person there, but it soon began to fill up. Two bunches with kids, the kids weren't too bad, the adults were noisy as hell. Every time a kid got a pin down, they screamed encouragement. Grrr. My ears are still ringing. I felt a bit sorry for the young man on duty today, he was alone and one group were demanding food all the time and then the phone was ringing off the hook plus new people coming to sign in as it were. He is the son and grandson of the two owners so presumably plans to take over from his grandfather one of these days. They are such a nice family.

Afterwards we had to go to the store for a couple of things we forgot the other day and also to the pharmacy to pick up a med for me which turned out not to be ready. I asked them to deliver it tomorrow. Dropped a book off at the library and then home. By the time I got into the apartment I was whacked and when I finally sat down, I dropped right off. Glad I had some turkey soup to use as it didn't take long to defrost later and it is full of turkey and veg so a pretty nutritious meal.

So, in ten minutes it is my favourite programme (Jeopardy) so I am pausing for now.

Kimchi is one of my favourites along with noodles of most kinds. This one sounds pretty good to me.

The power trio of butter, kimchi, and gochujang produces an umami ballad so beautiful in this udon 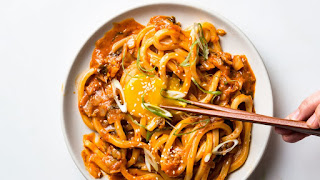 recipe, you’ll want to play it over and over again.

1. Heat 2 Tbsp. butter in a large skillet over medium-high. Add chopped kimchi and gochujang and cook, stirring occasionally, until kimchi is softened and lightly caramelized, about 4 minutes. Add broth and kimchi juice and bring to a simmer. Cook until liquid is slightly reduced, about 3 minutes.