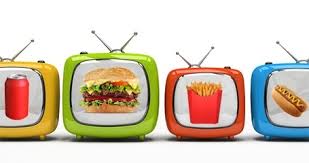 I don't watch a heck of a lot of TV and mostly when I do it is on one of three stations which don't have advertising. The only channel I watch that does have ads is the one showing Jeopardy which is my favourite show. Even that half hour show has three ad breaks. However, Thursday night I was thinking that I wasn't seeing any of the Christmas shows, etc. so I found Snow White and the Huntsman on the Home Channel. I stood it for about an hour and then I had had enough. I think I saw more advertising in that time than I ever did movie. So, turned off the TV and ordered it from the library instead. I really don't understand how anyone can put up with it. There is only one advantage I can see, you might need a coffee or bathroom break but otherwise, no thank you.

The weather has been absolutely perishing today. When we went to the bowling alley at noon, there 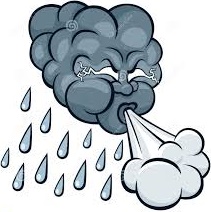 was one hell of a gale blowing and that, of course, made it even colder. I got from the car to the alley as fast as possible. When I went inside there was one heck of a loud bang - we figured it was scaffolding being blown off the roof - they are having work done. I bowled pretty well today, for a change, and was thoroughly teed off when right at the end, Matt kept throwing strikes and beating me. Well he did that twice, the third game I actually won.

Talking of weather, we are pretty lucky that we haven't really had much snow at all, Buffalo, which is not really that far from us, as the crow flies, has been deluged with the white stuff. :Lake effect snow as they are south of the lakes. I am told that the roads in our sister town are pretty bad. I call it a sister town because you can't really tell, except for signs, where one town ends and the other begins. Round here the roads weren't too bad.

Here's something a bit different and something I will certainly plan on making. 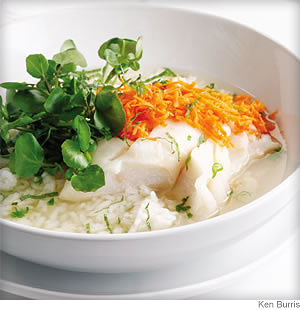 1. Combine rice and water in a medium saucepan. Bring to a simmer over medium heat; cover and cook until the water is absorbed, about 20 minutes. Stir in lemon zest and juice.

2. Meanwhile, bring broth to a simmer in another medium saucepan over medium-high heat. Reduce the heat so the broth remains steaming, but not simmering. Add fish and cook until just tender, about 5 minutes. Remove and break into bite-size chunks.

3. Divide the lemony rice among 4 bowls. Top with equal portions of the fish, arugula (or watercress), carrot, mint and scallions. Ladle 1 cup of the warm broth into each bowl and serve.