What a day was Tuesday. I couldn't send emails and then discovered there were quite a lot of them which hadn't gone out. I called Rogers TechXpert and they worked on it, leaving me a message saying it was fixed. It wasn't I called them back and after some time I got it fixed on both desktop and laptop. I also got them to change the protocols from imap to POP. The imap was giving me all kinds of problems although I had been assured it was the way to go etc. etc. My systems did NOT like it one bit. This meant that for most of Tuesday evening I couldn't use my computers.

I was somewhat surprised today to learn that my cousin and her husband, who are living in New
Zealand, are returning to the UK and have bought a Narrow Boat with which to cruise the canals in England. She sent me pix of the interior, looks pretty good and a nice place to live. My cousin has lived on a boat for a large part of her life when she and her sisters went to live with my parents when they lost their own. I was astounded when I heard this because I thought they were a fixture in NZ, he has children living there. My cousin has now lived in Malta, England, South Africa and New Zealand. She certainly gets around. I am pretty sure some friends of mine own one of these Narrow Boats too. If the weather is nice, not a bad way to live although she tells me they are planning to spend the winters touring Europe in a camper. I wonder how they will find England now, after Brexit?

Just realised today is December 1st. Only 24 more to go. I have bought some chestnuts to make stuffing for the neck of the turkey. Maybe this weekend I will go through the laborious job of cutting, boiling and peeling them. I hope there are enough, quite a few appeared to have bug holes when I was picking them out. Still no sign of the Christmas Pudding I ordered from England. They assure me it will be here before Christmas but I am beginning to wonder. I wish now I had made my own. 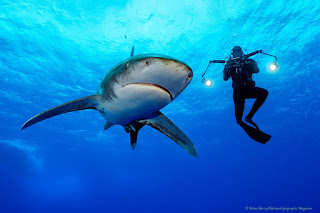 Well we have just returned from our local theatre having watched and listened to Brian Skerry the National Geographic underwater photographer. I was absolutely fascinated. Matt less so unfortunately. He showed us pictures which told stories about the oceans - mostly stills but there were a few videos. There was a question and answer session afterwards but Matt wanted to leave so I never got my questions answered. When asked about the most dangerous sea creature he said a salt water crocodile. His comment was if you were in the water with a croc of a certain size, you were definitely on the menu. He talked to us about sharks and told us how many thousands were being killed each year, many of them for shark fin soup. He also talked a lot about seafood farming. The new farms are designed in such a way that either the sea currents, or filter feeding shellfish, can deal with the pollution caused by such masses of fish. I have linked his name with his Facebook Page where you will find many of his stunning pictures. He was asked if he was a vegetarian. He said no although he had tried to be. Said he was extremely fussy about what fish he ate and it's sustainability. There are so many creatures which are on the verge of extinction.

Whilst waiting for the show to begin, we got talking to the man sitting next to Matt. Turned out he was a bass player for the Kitchener Symphony Orchestra. He told us he had spent time in England, playing in Birmingham and has also played at the Albert Hall in London. Interesting guy.

Practically every recipe I come across for carrots adds all kinds of sweetening in one way or another. Carrots do NOT need sweetening in my opinion, they are sweet enough on their own, and this one doesn't do so. 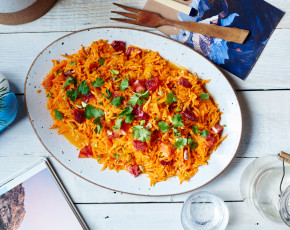 comparison in this salad recipe.

2. Meanwhile, cut all peel and white pith from oro blanco; discard. Working over a small bowl, cut along sides of membranes to release segments into bowl; discard membranes.

3. Whisk garlic, oil, lime juice, red pepper flakes, and cumin in a medium bowl to combine; season dressing with salt. Add pistachios, carrots, and half of oro blanco and blood orange and toss to combine. Season with salt and let sit until flavors meld, 25–30 minutes.

4. Just before serving, mix in half of cilantro and parsley. Top with remaining herbs and citrus.