Because I was delinquent with my blog yesterday, Alex J. Cavenaugh said I should post two recipes today, so here you are.

A bistro basic that the critic Bryan Miller brought to The Times in 1988 with the help of Pierre Franey, this luscious roast of pork comes from the kitchen of Adrienne Biasin, who for years ran a homespun and legendary restaurant in Paris, Chez la Vieille. The meat is first browned over the stovetop to sear in the moisture, then braised slowly in onions and milk. The pan juices are set aside 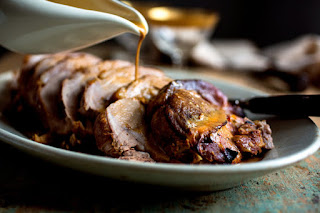 to form the base of a gravy, and the roast is finished in the oven. It takes some time, but is beyond easy to make, and pairs well with a glass of Beaujolais and dreams of travel. (Sam Sifton)

1. Rub the pork with salt and pepper.

2. Heat the oil in a Dutch oven. Brown the pork well in the oil on all sides over medium heat for about five minutes. Add the onions, then stir and brown for five minutes more.

5. Strain the milk gravy into a saucepan, add the cream and bring to a simmer. Save the onions and the milk residue. Place the roast in the oven and cook 10 minutes or until brown.

6. Slice the meat and serve it with the gravy spooned over and the onion mixture on the side.

Because it so expensive lamb is not something I cook often in Canada. I used to prepare it a lot in England. Anyway, I saw this recipe and decided I might try it the next time I have a leg of lamb.

Craig Claiborne brought this marvelous dinner-party centerpiece to The Times in 1958, after securing it from Myra Waldo, a globetrotting food and travel writer who edited “The Complete Round-the-World Cookbook,” featuring recipes gathered by Pan American Airways. Mr. Claiborne recommended this one in a column in the newspaper four years later: a leg of lamb roasted above carrots and onions, broth, hot coffee, cream and a sprinkling of sugar. Really! The result on the plate 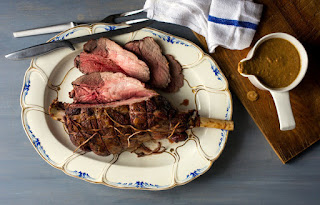 is remarkable in the way the richness of the sauce mingles with the big taste of the lamb. All we needed to do to improve it was exchange the beef broth Claiborne used (too tinny in flavor) for some of the low-sodium chicken variety. (Sam Sifton)

1. Rub salt and pepper into the lamb. Place the lamb in a roasting pan and surround with onions.

4. Transfer lamb to a warm platter and force the gravy through a sieve or purée in an electric blender.