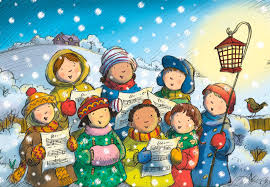 Well, well, well. For years I have been irritated by the carol We Three Kings as sung in North America because the final word of the chorus was, from what I was taught, incorrect. Today I decided to check it. Now I find that I was taught incorrectly and the North American words are right.  The difference being the last line of the chorus as I was taught was "Guide us by thy ancient light". Now I have discovered that "Guide us to thy perfect light" is the correct wording. I checked Wikipedia and then I decided to check a carol book I have had forever - since 1953 - and blow me, that is the wording in my Oxford Book of Carols. Now I wonder where I got a different version. I was in the school choir once upon a time, so maybe the music teacher gave us that version. I might say I love real Carols. A lot of the Christmas songs irritate me, but a good, old fashioned carol I always enjoy. I often wish I had heard Matt sing as a boy, he was one of the top boy choristers in England and at Christmastime he used to go from door to door singing. He also used to sing at weddings for the local dockyard and the naval officers. As well as singing in their church. Once upon a time, he made a record, but he doesn't know what happened to it. Such a shame.

Had to go to our doctor's today for Matt to get a refill. She wasn't as busy as usual and had time to talk to us a bit. She had mentioned something before, but today explained that the Liberal government have, I think, passed an act creating an oversight committee in the Health Ministry. The members of this committee are able to visit any doctor and ask to see the patient's files. Basically the intention is to ensure the doctor is following correct procedures and practices, but it means that there will be no confidentiality any more and the doctor/patient relationship will be seriously damaged. From what she was telling us, patients tell their doctors all kinds of things they would not want known elsewhere and their right to privacy would be infringed. This is only a concern of Canadians of course. I was horrified though. Not that I give a hoot if anyone sees our files, but I can imagine many cases where the patients would be really upset. The doctor mentioned things like sexually transmitted diseases, infidelities, mental problems and so on, none of which would people want others to know. I emailed everyone I could think of and also published it on Facebook. I think we need to really protest.

Trump built a wall in Scotland and expected the residents to pay for it. This is actually old news, but there is a newer article in the NY Times showing a huge berm Trump has built in front of someone's home in Scotland because they would not sell him their house.

I might say it is very cold here at the moment, there is a bit of a walk from the parking lot to the doctor's office and I froze in the wind. A lazy one, it went through you instead of round you. We also have plenty of snow which I do hope will hang around til Christmas. We have been spoilt having so much warm weather for so long.

Don't think I have mentioned we have ants, seen them in Matt's bathroom, the kitchen and my computer desk. Didn't occur to me to mention it but happened to go collect mail and the new supers were there as well as the Building Manager. I mentioned ants and was told to put in a work order which I did straight away and there is a pest control guy coming tomorrow. However, typically, I haven't seen an ant since.

I love Sweet Potatoes, unfortunately, Matt does not so I probably will never get to try these. 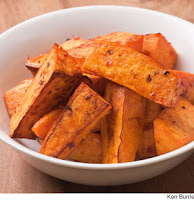 3. Spread the potatoes evenly on a rimmed baking sheet.

4. Roast, stirring once or twice, until the potatoes are tender and browned, 20 to 25 minutes.

Tips
Chile-garlic sauce (also labeled chili-garlic sauce, or paste) is a blend of ground chiles, garlic and vinegar. It can be found in the Asian section of large supermarkets and will keep for up to 1 year in the refrigerator.