I have often been told by weight management authorities to use a smaller plate for my meals. This finally explains why. 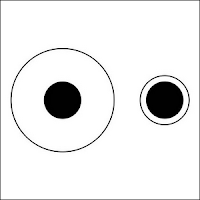 in the late 1880s, is a simple illusion wherein there are two identically sized filled-in circles placed side-by-side, but one of the circles is surrounded by another circle (ring). Despite the identical size of the two filled-in circles, people consistently rank the circle-within-the-circle as being smaller because the presence of the outer circle (ring) creates a perceptual error.
So how can an optical illusion that creates a perceptual error in size help anyone lose weight? It turns out that the same mechanism that leads us to believe the circles are not equal in size can also apply to serving sizes on plates. In a series of experiments, researchers from Georgia Tech and Cornell University demonstrated that study participants consistently took up to 13 percent more food than they intended when using larger plates. The smaller the plate, the more likely the participants were to not only portion out less food than the people with the larger plates, but to undershoot their portion goals by 12 percent.
The take-away? Serve your meals on smaller plates. The smaller the plate, the bigger the food looks and the less likely you are to over serve (and over eat).
I stole this from How to Geek. They often come up with some interesting  trivia in their emails and this was certainly one.

I have been telling the realtors here that we are getting bugs from across the hall. This morning the pest control people came and worked on the hall carpets for about an hour. Not sure what they were doing. Matt said they had all kinds of buckets of stuff and they were obviously using a machine as well. However, it means somebody finally listened to me. Oh, by the way, I was NOT bitten last night. Keep your fingers crossed for me that it will continue. Neighbour lady said she hadn't been bitten for 10 days. I was very envious.

I guess I am either getting tired or extremely lazy, but I bought some of my local store's Decadent Molten Chocolate Cakes for Easter. We have had them before and they are delicious. I am pretty sure there are 4 in a box. They were on special, two boxes for $8 so, yes, I bought two. Well I am all for a bargain after all!! They keep fine in the freezer.  Actually I was a tad annoyed with the bakery dept. at Zehrs (our local store) because I phoned them to check they still had them. Thought they might have been a Christmas item. In the first place the girl I spoke to in the bakery didn't seem to know what I was talking about then she asked someone else in their department and they didn't know either. Yet, when I went to the store, there they were.  Matt used to make these, but he doesn't do much cooking any more and as I will be dealing with a roast of lamb and the trimmings, I took the easy way out.
However, on the assumption you may not be feeling as lazy, here is the recipe Matt uses. It is really very easy. These have a lot of different names, Lava Cake is one often used. Actually, if you eat these cold, they are also delicious. 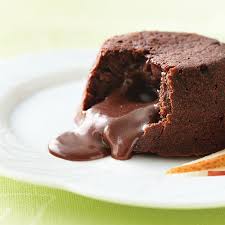 2. Beat together sugar and egg yolks with electric mixer until thick and creamy, about 4 mins.

3. Pour in chocolate mixture and beat together for 5 mins.

4. In a separate bowl, beat egg whites until stiff peaks form, about three mins. Fold into mixture along with flour.

5. Pour into 6 nonstick buttered moulds or non-stick muffin tins (we use cocottes or ramekins). Bake for 5 to 7 mins or until edges are just cooked and centre is still liquid. Cool for 5 mins in cooking dish. Carefully remove to serving dishes. Serve with lightly whipped cream

Freeze, uncooked, overnight or up to 2 weeks if you wish

Preheat oven to 425°F (220°C). Take ramekins out of freezer and remove plastic wrap. Bake volcanoes for 18 minutes - no longer! Cool on rack for 5 minutes. The outsides will be crusty and the centers will be gooey - sort of like your average volcano.

Email ThisBlogThis!Share to TwitterShare to FacebookShare to Pinterest
Labels: Bug story, How to Geek, Molten Chocolate Cake, The Delboeuf Illusion