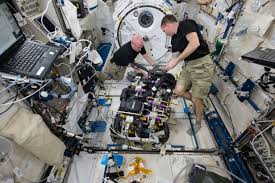 We have just watched A Year in Space about Scott Kelly's stay on the International Space Station. A very interesting programme. I cannot imagine what it would be like to spend a year there. It is not, as I had always thought, one bit like the Enterprise. There is no artificial gravity and there is very little space. It is a series of long tubes all of which are stuffed with supplies and equipment. We watched the programme recorded by the Canadian astronaut, Chris Hadfield, so I knew what to expect when watching tonight. I have often thought I would like to go into space, but I cannot imagine spending all that time away from earth, friends and family living in such an uncomfortable environment. I wouldn't have a problem with the space ships in the Enterprise movies. They never get to sit down or lie flat on a bed. They are floating all the time in 0 gee. They are working almost constantly, either carrying out experiments or possibly effecting repairs in the station. Of course on this mission, two of the supply ships didn't arrive so they were getting very low on supplies. Eventually a Japanese ship got there. Not sure I would like to be a wife either knowing my husband was floating round in space. Or  a mother I guess. There is now a programme about Neil Armstrong.

I told you I had made the filling for my tourtières yesterday. I had only enough pastry to make two pies and it snowed pretty hard last night meaning that Matt did not do his usual early morning stint of going to the grocery store at 7 a.m., the roads being too bad. However, by 10:30 the roads weren't too bad so we both went and amongst other things, I had now got the rest of my pie shells. Then later I realised that I didn't have big enough cookie sheets. I had not long bought new ones. In the end I made the pies and had to cook only 2 at a time. We cut into one for supper, it was very good if I do say so myself. It was a lot easier to do it this way, making the filling one day and then making the pies the next day. Much less tiring. So, as promised, here is the recipe again.

As a change, you can use frozen puff pastry for your pies.

1. Heat oil in a heavy pot over high heat. Add ground meat and sauté, stirring occasionally, for 5 minutes or until the pinkness disappears. Drain off fat.

2. Stir in the onion, carrots, fennel, bay leaf, dried thyme, dry mustard, all-spice, cinnamon, rolled oats and salt and pepper. Add enough stock to just cover the top of the meat. Lower the heat to low, cover and cook slowly for about 45 minutes, or until the onions disappear. Check and stir after 30 minutes. Re-season if needed. Cool, remove and discard bay leaf and stir in parsley.

4. Take out four pastry shells to use as bottoms and sprinkle with breadcrumbs or semolina to absorb any fat. Pile meat mixture onto each pastry crust, leaving a 1 inch border. Brush edge of pastry with water. Top with remaining crusts and press edges together to seal, crimping decoratively if desired.

5. Combine beaten egg with cream and brush over pastry. Cut steam vents into the top crusts.

6. Bake for 15 minutes in lower half of the oven. Reduce heat to 400°F/200°C and bake for another 15 to 20 minutes, or until the crusts are golden. Cooking four pies it is necessary to rotate their positions in the oven.