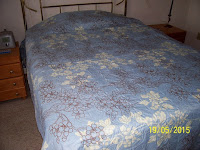 We finally got everything back into the apartment and the last thing was to take the new bedspread down to the launderette - much too big and heavy for our machines here. Amazing, in the launderette they charge $5 for a wash and you can us quarters for the dryer. I ended up with $1.25 in the dryer and am not sure I needed that much. It is now very much softer than when we bought it which is a good thing.

Whilst moving all the stuff from our balcony I was disgusted to find a cigarette but out there. I suppose somebody threw it off their balcony and it was blow on to ours. Actually, that's pretty dangerous, especially in summer if people are sitting outside.

But.... I am still getting bitten. Not a lot but now and again. Wherever I think I was bitten ends up being sprayed by my trusty little steamer. I do hope we can control it on our own I don't want to have to pack everything up again.

Then our fridge is coming tomorrow. Decided to put all the contents in the coolers with ice or ice packs in the morning and if it hasn't arrived before we go to bowling too bad, we won't be here. I had 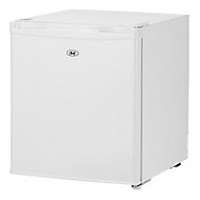 a phone call from the super's wife saying I had to be sure to empty the fridge, really? I thought someone else would do that for us!!! Actually I wish there was a good fairy who could deal with it. She said she will know an hour before they are coming and will presumably let us know. I had cereal with warm milk for breakfast today. It was horrid.  We usually drink tomato juice at lunchtime so we put ice in that. Better than warm, but not as enjoyable. As someone commented yesterday, we sure do rely on fridges nowadays. Neighbours confirmed today that they had got a new fridge and it was much smaller. They bought a bar fridge. I checked out the prices, I can get a 1.6 cu. ft. fridge for $119 which isn't bad, or there are a couple of others which range up to $199. We'll see what happens.

As I have mentioned before, curry is very popular in England. I am told that, these days, you can find an Indian shop on every corner like you once could find a fish and chip store. This one has been lightened up somewhat. Canola oil is the same as rapeseed. Bearing in mind the chopsticks in the picture, not sure if this isn't meant to be Chinese although if it were, the chicken would have to be in bite sized pieces. 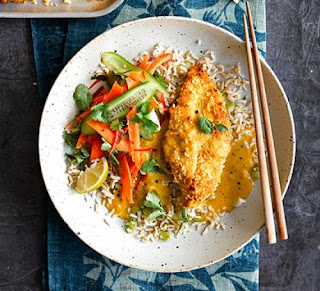 fried) until crisp and golden. If you're following the Healthy Diet Plan then this a great dish to add to your repertoire