I finally got an appointment to see the orthopaedic surgeon on March 17th. St. Paddy's Day. My hip is not bothering me nearly so much, but still hurting enough to screw up my bowling in a big way. At least, that is my excuse for my terrible scores lately. Actually March 17 is quite a prominent date in our family. It was my anniversary with my first husband (53 years ago), and it is Matt's youngest's birthday as well as her husband's.

A major storm is being forecast for this area for Tuesday. It seems to have already started as it was snowing/sleeting on the way home from bowling. We have an appointment tomorrow afternoon but if the weather is bad, we will not be going.

I have just started Brandon Sanderson's latest Mistborn story, The Bands of Mourning. He certainly hops around from book to book. Also means we have to wait a long time for sequels. That argues in favour of not reading a series until it's finished. Who knows what's going to happen. Like the Wheel of Time author, Robert Jordan, dying before he had finished his very long series. He had also been writing some offshoot stories but I guess those tales will never be told now. Such a pity. One gets some authors who write one book and that is all they ever do and others who are incredibly prolific but don't necessarily get their ideas all written. The Stormlight series by Brandon is a case in point, it is taking forever between books and could well end up as one of those which doesn't get completed. Not only that, remembering what happened before is not the easiest thing for the reader either. If one owns the books I guess it is easy to re-read, but if I owned every book I read I would be a pauper. Even Kindle books are getting expensive especially from well known authors. I tend to think it is a rip off to charge so much for electronic books just because you have a "name". Many of my friends, including ones reading  this blog, tend to average between $2 and $5 for their books. All I can say is, thank heavens for libraries.

This looks an interesting recipe from the New York Times. Everyone seems to like meatballs and these have a good tasting sauce on them.

In France, meatballs are called boulettes, and by far the favorite versions are the spice-scented North African type. Most of the neighborhood Tunisian and Moroccan restaurants in Paris offer them, served as an appetizer or a side, or in a fragrant main-course tagine with couscous.

This recipe is an amalgam of several that I found on my bookshelf, among them one called boulettes 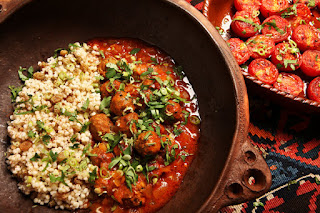 tangéroises in an old French cookbook. Since I like things a bit spicier, my boulettes are more like Tunisian ones, in which hot pepper is more assertive.

Make the sauce: Heat oil over medium-high heat in a wide, heavy bottomed saucepan. Add onion and cook without browning until softened, about 5 minutes. Add garlic, tomato paste, cinnamon and saffron, and stir well to incorporate. Season generously with salt and pepper, and allow to sizzle for 1 minute more. Add broth and simmer gently for 5 minutes. May be made several hours in advance, up to a day.
Make the meatballs: Put bread cubes and milk in a small bowl. Leave bread to soak until softened, about 5 minutes, then squeeze dry.
In a mixing bowl, put squeezed-out bread, ground meat and egg. Add salt, pepper, garlic, nutmeg, ginger, turmeric, paprika, cayenne, cloves, coriander and cumin. Mix well with hands to distribute seasoning. Add 2 tablespoons each of parsley, cilantro and scallion, and knead for a minute. May be prepared several hours in advance, up to a day.
With hands, roll mixture into small round balls about the size of a quarter. Dust balls lightly with flour. Heat a few tablespoons of oil, or a quarter-inch depth, over medium-high heat and fry meatballs until barely browned, about 2 minutes per side. Drain and blot on paper towel. Simmer meatballs in saffron-tomato sauce, covered, over medium heat for about 20 minutes, until tender.
Meanwhile, make the couscous, if desired: Cook according to package directions, fluff gently and stir in butter and raisins. Season with salt and cinnamon, and toss well.
Garnish meatballs with remaining parsley, cilantro and scallion. Serve with couscous and roasted tomatoes if desired.