So I went to see this 16 yr old kid today (Thursday) about my hip. No really, he did not look old enough to be a doctor, let alone a surgeon. I told him so too. However, I liked him and he was very good at showing me and telling me all the problems. I do not need a hip replacement, hurrah, he said the pain I had had a month or so ago was a flare up caused by my fall before Christmas, but he proved to me that I have bursitis in my upper thigh/hip area (that is the pain I have suffered in bed at night) and we have arranged for me to have a cortisone injection in a few week's time. I think that must have been weighing on my mind, along with a few other buggy things, because I felt very much better, mentally, after we left. We then went bowling and I thrashed the old man. Woo hoo.

I had a phone call in the morning from Terry, the manager/owner of the real estate company which is returning.

runs this building. She says the pest control people are telling her that we are not co-operating with them and doing what tenants are requested to do before they come in. Really. I wonder what all that stuff was in plastic bags, not to mention all the pictures taken off the walls and switch plates removed, dresser drawers emptied, ornaments removed from all the rooms and so on? As I pointed out to Terry, we did what we could but as a couple of oldsters etc. some things were difficult to do anyway. We have spent over $150 on the laundry machines in the last few weeks. amazing how quickly $2 a time mounts up. That's for both thedryer and the washer so if using them both, $4. But we are not co-operating? I actually think I am beginning to get on top of the job anyway and once I spread the diatomaceous earth around (Matt says I like that word), I firmly believe we will not need them any more. I spoke to a woman in our corridor who has the same problem and she tells me she hired a company to do all the vacuuming which is necessary etc. and it has cost her $700 which she is going to claim from the landlords. She'll be lucky. I told her my cleaners would have done it for a lot less. I think she was nuts to pay that kind of money. I have also been told, by the same neighbour, that the guy where it all started, across the hall, is not coming back anyway. Not sure how true that is. The super says he 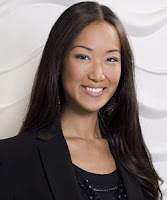 Friday Matt has to see the plastic surgeon about his skin cancer again. Should be fairly easy to deal with this time, unlike when his leg had to be treated. I assume they can do it in their own clinic instead of going to the hospital If only we had known how dangerous the sun was 70 years or so ago. He will not be seeing the same doctor as she is on pregnancy leave I gather, but this one looks just as attractive on line. I wonder if she too will be a disappointment when we see her.

I kind of invented a dish for supper on Wednesday. It was an amalgum of two or three recipes but it worked pretty well. Looks a bit messy but I am no photographer I'm afraid. It was pretty good to eat though. 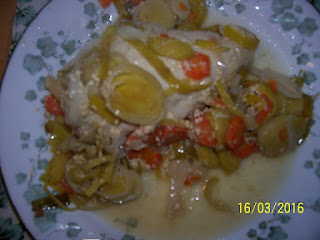 1. Prepare two pieces of foil to be made into packets. Big enough to cover everything above in two packets. Place on a cookie sheet with the edges turned up.

2. Slice the leeks in rounds. Use mainly the white parts. Slice the carrot. Divide the vegetables between the packets and season.

3. Season the chicken with salt and pepper as well as some thyme. Place each  breast on top of the vegetables and drizzle with a little oil.

4. In a small bowl, mix yoghurt, mustard and wine (not too much of the latter, just enough to make it spreadable) and cover the chicken breasts with the mixture.

5. Close up the packets tightly so they don't leak and place in a 375°F oven for 25-30 minutes. Unwrap carefully to ensure the steam doesn't burn you. Place the chicken on a plate and tip the vegetables and juice over top. Arrange more prettily than I did.