Well, I feel really industrious today, Tuesday. I have just made Marinara sauce for the freezer, Cheese sauce for a Cauliflower

cheese, the remains of which will also go in the freezer. A large pot of Chili con Carne which also will end in the freezer. My back is killing me. My stool didn't really work I'm afraid. In the first place one has to move around too much. I thought I had everything close, but I didn't, then I found one leg was hurting whilst the other was on the step stool. Bit different if you are a prep chef. All you do is stand and chop, dice or slice.  The cheese sauce shows a whisk 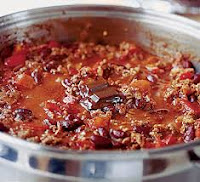 which is something I never use when making sauces. Presumably to whisk out lumps, but I make mine carefully in order to avoid lumps in the first place. I have "gone on about" making such sauces properly before. I forgot, naturally, to take pix of the sauces before I froze them. Same with the chili. Making it I realised I didn't have any pinto beans so decided to use black beans instead. Looks OK tastes OK too. Had a little lamb left so chopped it up fine and threw it in. Don't tell Matt he had enough roast lamb last week he said. I haven't made chili in  years - I really don't know why not. Have a friend in NC who submits chili to the local chili fest tournament every year. I once asked him for a recipe and he sent me his second best, the first is a secret. I have no clue what happened to that recipe.

We have cooked a similar recipe to this a number of times. Ours was a Jacques Pépin recipe, similar and always very popular with our guests. I would choose heavy cream for this dessert.

From Kristina McMillan, director, NorWest Co-op Community Food Centre, Winnipeg Poached pears in red wine is pure heaven. This is a traditional Italian recipe made with simple ingredients. Chef Anna Paganelli of De Luca’s in Winnipeg shared the preparation with me. I had the pleasure of working alongside Anna for a few years, and she taught me that if you use quality ingredients in your recipes, the flavours will absolutely sing.

Place pears in large saucepan, skin side up, and cover with water. Add lemon and cinnamon stick. Bring to a boil over medium heat. Cover, reduce heat and simmer for 15 to 20 minutes, until pears are cooked but still firm.
Drain pears, reserving cinnamon stick. Return pears to pan, skin side up, along with reserved cinnamon stick. Pour in wine and sugar. Simmer over medium heat, uncovered, until liquid has reduced slightly and thickened, about 15 minutes. Remove from heat and let cool slightly.
Divide pears among serving plates. Serve with a scoop of vanilla ice cream in the centre of each pear. Drizzle with wine syrup.