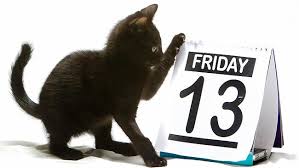 Friday the 13th. How many of you are superstitious? I have a very good friend who has a birthday today. Didn't ask her, but hope she isn't concerned.

As usual, Thursday bowling went pretty well. Kept a good average. Matt was not as good but he won the last game. On Thursday there is another couple (usually a threesome, but one is away) who bowl next to us. They play 3 or 4 games in the time we take to play 2 and a bit. They are not young but I think younger than we are. I said to them today, "don't you have any aches and pains?" they assured me they did not. Not that I would want to race through our games, but we are physically unable to play that fast. I am feeling very sorry for the "son owner" who is working some 15 or 16 hours a day this week because his dad has to go to visit his mom after her back operation on Monday. His dad is worn out driving up and down to Toronto every day as well. Apparently her hemoglobin was low today so she had to have a second blood transfusion. Doesn't sound too good to me. Not a medic of any kind though of course. 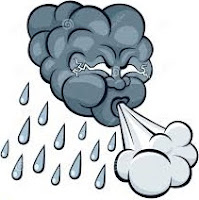 We are getting some of the predicted wind storm this evening (Thursday) but so far not as bad as some of the pictures we have seen from the States. Hope it won't get worse. It's been blowing pretty hard all afternoon, had trouble walking around. Had to pop into the store which has an underground parking lot and it was howling through there so had trouble walking there too. It was also damp, raining off and on, and pretty cold. I didn't want to take my coat off in the bowling alley for a while. A couple were just leaving when we arrived. I told them they would do better to stay where  they were, but the husband assured me he had bowled so badly he preferred the weather. He had been beaten by his wife so had to buy her lunch.

I occasionally borrow recipes from Kevin at Closet Cooking. He's OK so long as I don't do it too much. He really comes up with some unusual recipes. This one appealed to me. 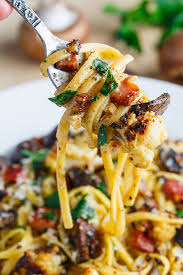 A roasted cauliflower and mushroom pasta in a creamy egg and bacon sauce seasoned with plenty of fresh cracked pepper.


Note: To speed things up, about 20 minutes into roasting the cauliflower and mushrooms, get your pot of water for the pasta on the stove and start bringing it to a boil.
Option: Replace the parmigiano reggiano with pecorino romano.