A to Z, Stews in Wartime. 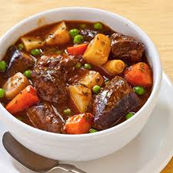 Z. I’m not sure what date the great theme reveal is supposed to be, but it must be no surprise to anyone that mine is basically food oriented. When I remember being a little kid and sitting with a mouthful of stew at the kitchen table and refusing to swallow it, it amazes me that I developed an interest in food. My mother was a stupendous cook but this would have been during the war years (WWII) mind you, when a lot of the things we take for granted were not available; even today, I am not that keen on stews although I make them for us because Matt likes them and it is a convenient way of cooking to shove everything in the crockpot and forget about it.  I wonder if wine was available during the war years, I suspect not. Garlic was virtually unheard of when I was a child. I just found a fascinating BBC article called Christmas Under Fire describing what it was like at Christmas over the 6 years of the Second World War. Worth reading if you are interested in history.

Being originally from England, leg of lamb is something I often cook but this recipe is very different in its use of anchovies in particular. I know it’s not long since I posted a lamb recipe, but Easter is the time for lamb.

Email ThisBlogThis!Share to TwitterShare to FacebookShare to Pinterest
Labels: A to Z, Roast Leg of Lamb, Stew, WWII