Bowling, Hospital Response, A to Z.

It was, of course, a bowling day again on Monday and for once we both bowled pretty well. Matt increased his average by 2 points and I increased mine by 1 so we were both feeling pretty chuffed. The alley owners and I discussed and fixed up the end of season dates as well as the beginning of the summer league dates. We were supposed to go on the Travel League on Thursday,  but because of the body work we are having done on the car, we can’t go. Not sure what time we will be picking up the car, Matt guesses late afternoon so we will go to our home alley as usual on a Thursday. In April we also have the Travel League banquet which takes place on the 23rd.

I nearly forgot, I had a response from the hospital. However, before they can take action they needed Matt's permission to open his file. Permission having been given, we will see what happens from there.

I have been working on my A to Z posts some more, I have three 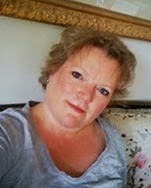 posts to be completed. I didn’t take part in the big reveal on Monday as I had forgotten which day it was anyway. As I said it’s all about food anyway which should come as no surprise to anyone. If anyone needs more details about the A to Z this year, just click on the badge/logo at the side and it will take you to the sign up page. It is, of course, intended to honour our good friend Tina Downey who died in September last year and whom we very much miss. She was a great motivator for the hosts of the A to Z challenge and you know they will really miss her this April.

I like rice salads and the use of coconut intrigued me. So I thought I would share it with you.

In this simple one-bowl meal from F&W’s Kay Chun, delicately 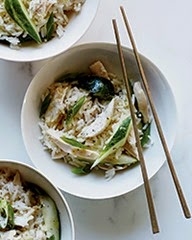