Come back 2014, please. First we have all the health issues both 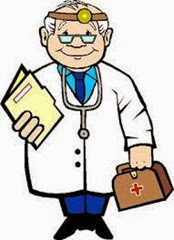 Matt and I had and are still suffering from then Tuesday I had an appointment with my family doctor for my quarterly diabetes check. I got there at about 10:45. They couldn’t find me on the appointment list. Then it turned out that my particular doctor had changed her schedule but nobody had contacted me to change my appointment. I was steaming. They slotted me in with another doctor and I got in to see her half an hour late. However, this doc doesn’t know me so it took her forever to go through everything and then she wouldn’t give me some pills for Matt because she hasn’t/hadn’t seen him. I said he’s right outside but no, he had to have an appointment. I know it’s a narcotic but… our own doctor, who really knows us, would have prescribed some for Matt as well. However… I talked to one of the staff I know well and she is going to talk to our doc who will be there later in the day.

Then, we had arranged with friends to meet them at our favourite Chinese restaurant, the Mandarin, for lunch. I phoned them to let

them know we were on our way and off we set. When we got there, they were closed. Staff appreciation day, not being staff, I didn’t appreciate it. Our friends suggested The China House and we followed them there. Not a bad lunch, but not a patch on the Mandarin. We then went back to our friends’ house and spent a pleasant few hours with them imbibing a little wine and lots of nuts and such.

When we came home, having eaten a fair amount we decided to have soup for supper. I went to the freezer and was looking for a particular one when I knocked a container of frozen soup on the floor so the container broke and is now no use to us. Also, our soup had been preselected this way. An hour later, I go to serve the soup with the plastic soup ladle and what do I do, drop it on the floor and shatter it. Luckily I have a silver ladle which was more brown than silver so needed cleaning first. At the time of writing, the day is not over so what will I do next? I nearly knocked our friends’ photo off a table too but caught it.

I first posted this without dating it. I also just realised it is the 13th today even it it's not a Friday.

I enjoy celery soup, I do have a good and simple Weight Watchers recipe which I haven’t made for a long time but this one looks good and I like the idea of bacon croutons. 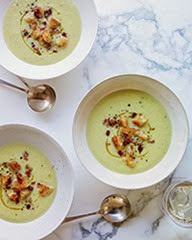 This elegant soup from chef Naomi Pomeroy gets a surprising amount of flavour from sautéed celery. It has great garnishes, too: bacon croutons and a drizzle of lemon oil. Be sure to buy extra-virgin olive oil infused with pure lemon extract.

Make Ahead The soup can be refrigerated for 3 days. Rewarm before serving.

Email ThisBlogThis!Share to TwitterShare to FacebookShare to Pinterest
Labels: A Chapter of Accidents, Celery Soup with Bacon Croutons, Mandarin