We had been invited to a retirement party on Saturday. We turned up there at around 8 as requested. There was absolutely nobody there that we knew, not even the retiree and his wife or his daughter; the son we don’t really know and grandkids we wouldn’t have known anyway. All the people that were there looked like they had escaped from kindergarten. I had a glass of wine and we stayed for about half an hour and then – feeling like fish out of water – we came back home. We were also somewhat overdressed. Presumably the idea was to have the retiree arrive late as a surprise, we didn’t realise that otherwise we might have arrived later ourselves. Not really our scene anyway. Not only that, Matt doesn’t drink on such occasions so it is less enjoyable for him.

Today of course is our bowling league so keep your fingers crossed that I continue to bowl well. I hope Matt bowls well too of course.

w, Tuesday at 11:30 I am going to be talking about the Black Widow Spider recipe which I posted the other day. This will be on the local radio station and then I will post it on their Facebook page. I must admit I think it is one of the best Hallowe’en recipes I have ever seen. I even found myself looking at twigs to make the legs the other day even though I will not be making it. There’s only us after all.

Here’s something very different – we enjoy stuffed vine leaves (grape leaves) done by the Greeks, dolmas, they are absolutely delicious. However this is another take on stuffing the leaves. Be warned, it’s not that easy to roll them up. Although these are basically just folded so maybe it won’t be difficult. 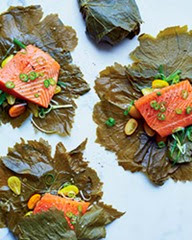