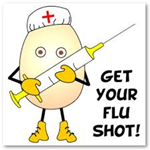 Thursday we dropped into the mall where we do our grocery shopping and I bumped into an acquaintance from our building who told me she had just had a flu shot at the pharmacy in the supermarket. We thought we would go and get ours done. Should have gone to our regular pharmacy, I had to fill in forms up the kazoo and when we went last year our regular pharmacy filled those in for us. However, it’s all done now and I have a sore arm. Matt never has a problem. We have been having flu shots for years. Of course we get them free. Last year in North Carolina I saw they were charging $20 for them. I wonder how many people bother – that would mount up for a family.

We needed our car undersprayed for the winter. However, they told us we had to

have 3 dry days before they could do it. Friday Matt was finally able to go and much to his horror there were cars lined up all round the block.  I guess we weren’t the only ones waiting for the weather to dry up. This is, of course, very important in Canada because of our winters with lots of ice and snow on the roads and heavy doses of salt as well. When Matt phoned me to tell me he wasn’t sure how long he would be, he figured he might get home around supper time!! He actually got home shortly after 11 so it wasn’t that bad. Apparently they had 4 guys working at spraying and two at sorting out the cars and issuing them with numbers. $73.35 which is 35 cents up on last time. Not too bad. Matt was #32 by the way.

I have recently started a problem with flaky nails and checking on reasons, one possibility is that I am not getting enough leafy greens. Could be as I seem to have “gone off” those I used to love. Kale is touted as a miracle green these days and coming across this one I thought it sounded good. I have never heard of Cotija cheese so I have linked it to Wikipedia. 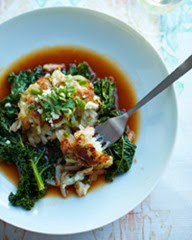 Husband-and-wife team Cory and Silvia McCollow make this elegant dish at their Oakland, California restaurant using local ingredients. It's popular during the spring because the crispy cakes showcase seafood (eaten more frequently during Lent) and scallions or spring onions, as well as greens.
Have a great day