I saw a headline which said that Oktoberfest was over, I assumed in

Munich. Ours hasn’t even started yet. It starts on Friday with the “tapping of the keg” and goes on for a full week. It is, I am told, the second biggest Oktoberfest and during the week you will see men in their lederhosen and women in their dirndles. Both very expensive items t

o purchase I understand. I used to have a dirndl skirt when I was a teenager in the UK. I loved it, but I didn’t realise at the time it was part of a costume. I didn’t have any more of the traditional garb than the skirt. In the middle of this we have our Thanksgiving as well. I believe finding accommodation in the area is very difficult too, maybe I should rent out a room – I don’t think. Having someone returning late at night drunk out of their gourd would not be pleasant.  I think we will just stay clear of it all as we usually do.

Over the weekend they showed The African Queen on TV, with no ads. I wasn’t going to watch it having seen it several times, however, m 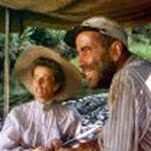 y attention was attracted because Alex Trebek of Jeopardy fame was doing the introduction and telling us how the director made sure to film it in Africa and how he picked a small river with little traffic to use for the setting. Alex certainly peaked my interest so I watched it after all. Considering it was made in the early 50’s it really wasn’t bad as far as the effects went. The acting of Bogey and Hepburn was brilliant of course and I really enjoyed seeing it once again. Something I didn’t realise, Bogey’s part was supposed to be an Englishman but he couldn’t do the accent so they changed it to a Canadian.

I made this recently and finished it last night. I decided it would be good to share with you as, at least in this part of the world, it is getting to the time where we need warming foods to eat. 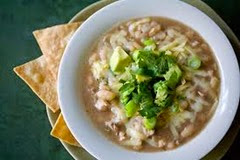 1. In a 4 1/2 quart (or larger) saucepan, cook onion in butter until soft, add bouillon, beans, water and chillies.  Simmer till heated through (and bouillon cubes are dissolved if using cubes) - about 10 minutes, stirring occasionally.  Then stir in cayenne pepper, cilantro, cumin and chicken and simmer again to let flavours mingle and everything is heated through.  Serve with shredded Monterey Jack cheese on top.