I had a very frightening email from the World Wildlife Fund yesterday:

Are you a child of the 70s? If you are, global wildlife populations have declined by more than half in your lifetime.
Our 10th Living Planet Report shows that our wildlife is in a sorry state, but we continue to use more natural resources than our one planet can replenish. It's time for a wake-up call. You can download the 10th edition of their Living Planet Report. We have to do something if nothing else by supporting organisations like World Wildlife Fund otherwise soon there won’t be any wildlife at all. It is important because of the interaction of all species which is part of our biodiversity. Don’t just read this and say “terrible” then go on to something else. Do Something.

Wildlife in our rivers, lakes and wetlands has suffered a 76 per cent decline – an average loss almost double that seen in land and marine species populations.
Land-based species populations declined by 39 per cent, a trend that shows no sign of slowing down.
Marine species populations declined by 39 percent. Species in decline include marine turtles, many sharks, and large migratory seabirds like the wandering albatross.
Wildlife populations are declining in tropical and temperate climates, but the biggest decline – 63 per cent since 1970 – has been seen in the tropics. Central and South America shows the most dramatic regional decline – a fall of 83 per cent. 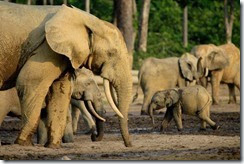 On the website there are examples of many endangered species, the African forest elephant above being one. There are dolphins and tigers on the list amongst others.

I am presently cooking up our turkey carcass for some soup and thought this recipe would be a good one to share.

Fresh or frozen ravioli cook in minutes and turn this light vegetable soup into a main course. Look for whole-wheat or whole-grain ravioli in the refrigerated or frozen section of the supermarket. Tortellini can be used instead of ravioli as well.

Makes: 4 servings, about 2 cups each

Make Ahead Tip: Cover and refrigerate for up to 3 days. Thin with broth before reheating, if desired.

Have a great day and don't forget the World

Email ThisBlogThis!Share to TwitterShare to FacebookShare to Pinterest
Labels: 50% Loss of Wildlife, Ravioli and Vegetable Soup