This is a great piece of video which Natasha posted on her blog Of Shoes and Ships and Sealing Wax and Cabbages and Kings and which I have decided to steal and post here as well.

As most of you know I am very strongly pro conservation and although I have been a fan of wolves for many years and support everything that is being done to reintroduce them to their habitats, I had never understood, until I saw this film, what a great benefit they can be to the eco system. People have been frightened of wolves for a very long time but they do not attack humans. They do, of course, kill animals for food and occasionally domesticated animals such as cows or sheep which upsets the farmers of course. Actually that is why the German Shepherd was “invented” to run the ditches round the sheep paddocks and fight off wolves. Maybe we should recommend them to sheep and cattle farmers instead of just shooting the wolves.

We thoroughly enjoyed our Chinese meal at 50% off. It cost us $14 for the meal, can`t complain about that. What I can complain about though, after lunch we went to the grocery where I had located turkey breasts. First of all the woman I spoke to had only put me a half breast aside. The guy who found it for me realised and said he had heard me talking about it and knew I wanted a whole breast. He found me one. Great, between 4 and 5 lbs. I would have paid $11 for that in North Carolina. I got sticker shock, $24. I was going to buy two, one for Christmas, but Matt wouldn`t hear of it. I will still be buying another one later in the year.

I received an appeal from World Wildlife Fund to help the Amur Leopard. I confess I had never heard of them before.

Wiki says The Amur leopard (Panthera pardus orientalis) is a leopard subspecies native to the Primorye region of southeastern Russia and Jilin Province of northeast China, and is classified as Critically Endangered since 1996 by 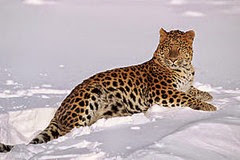 IUCN. Only 14–20 adults and 5–6 cubs were counted in a census in 2007, with a total of 19–26 Amur leopards extant in the wild. They are being trapped and killed for their fur as well as losing their habitat. I beg of you, if you can, to donate to WWF to help these animals.

It’s a while since I have posted a recipe from Mushrooms Canada, this one appealed to me. I have always enjoyed pot stickers. The only photo is covered with writing though.

Add the first ten ingredients in a bowl (mushrooms through pepper) and mix thoroughly using your hands until everything is well combined.
Lay out the wrappers on counter top and fill a small finger bowl with lukewarm water. Scoop out 1 teaspoon (maybe 1 1/2 teaspoons but no more) and place just off centre of each wonton. With your fingers or the back of a spoon, flatten the mixture slightly. Using your finger, moisten the edges of half of a wrapper and fold the dough over to create a triangle. Press the edges down firmly to ensure they are sealed.
Add the vegetable oil to a large skillet and heat to med-high. In single layer batches, fry the wontons until golden brown and crisp (about 3-4 minutes per side)
Serve immediately with side of soy or favourite Asian sauce.