I’ve  just started a book called Dragon’s Egg (no nothing to do with dragons) by Robert L. Forward, which is pretty scientific and at first I wasn’t sure I was going to continue as there was so much science, but I persevered and am now enjoying it. However there was one bit which said there were 4 black holes in the sun and that it would fail in a few million years but that humanity, having decided there was nothing we could do was ignoring it and hoping it would go away – what a very true statement about our attitude. Think of global warning. The existence of black holes in the sun is fictional by the w 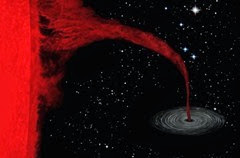 ay. Not that any of us would be around to see what happened. There is a report of a star managing to evade being swallowed by a black hole which has scientists somewhat amazed. They can’t believe it happened and with only minor damage. The picture shows plasma being drawn off a star as it passes a black hole. The book is actually turning out to be a very good one - it is an old book (1980) which has been re-issued.

Bowling yesterday was disastrous to say the least. My average dropped

by 3 points. A woman on our team, who is generally not a very good bowler, beat me in all three games. Matt didn’t do that well either. Oh well, having to throw practically every ball due to a lack of strikes and spares means I got lots of exercise.  Thursday we are bowling in the Travel League; we are in New Hamburg this month. Let’s hope we do better, although of course it doesn’t matter that much not like the league scores. The way this little picture works is better than I was bowling most of the time. I could NOT get the head pin.

I like Kraft recipes they are so easy to do.

Boneless chicken breasts are baked to tender, juicy perfection in this

HEAT oven to 350°F.
PREPARE stuffing as directed on package.
WHISK flour and milk in large microwaveable bowl until blended. Microwave on HIGH 4 min., stirring after 2 min. Add broccoli, cheese and thyme; mix well.
COOK chicken in hot oil in large nonstick skillet on medium-high heat 3 to 5 min. on each side or until browned on both sides. Place in 13x9-inch baking dish; top with vegetable mixture and stuffing.
BAKE 25 to 30 min. or until chicken is done (165ºF).

Serving Suggestion
Serve with a mixed green salad and your favorite fresh fruit to round out the meal.
Substitute
Prepare using your favourite flavour of STOVE TOP Stuffing Mix.
Have a great day