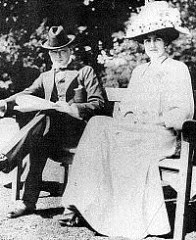 Matt and I started talking about the Churchills last night and it made me start doing some googling. We all know, or those of us from England do, about Winston Churchill and what he did for England during and prior to the war years, but I knew little or nothing of Baroness Clementine Spencer-Churchill, his wife. Their youngest daughter, only died in May this year at the age of 90. They had a son and three more daughters. She and Churchill got married the same year my father was born, 1908. I hadn’t registered they were so much older than my parents, Churchill was 40 years older than Clementine. 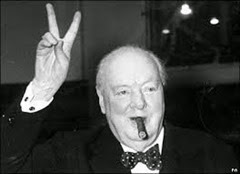 Churchill himself was such a part of my early life having lived through World War II. We decided to watch The Gathering Storm again which is about Churchill between 1934 and 1938 when people accused him of warmongering when in fact he was warning Britain about the Nazis who were building a war machine. On British TV some considerable time ago, there was a series about John Churchill, the original Duke of Marlborough and Winston’s ancestor, which I thoroughly enjoyed and I should check and see if I can get a copy of it. The first picture is of their engagement and the second a typical war time pose for Winnie. Some politician, not English, was visiting Australia and was trying to use this sign, trouble was he turned his hand round and that means something very different. The English way of giving someone the bird. The Australians were very insulted. To me, and to Matt, Winston was a great leader and we were so lucky to have him during the time of war.

Gotta have our eyes tested today. Annual thing. We don't pay for it of course, the government does and if we should need new glasses, our insurance pays for that.

I don’t actually make jam, I tried once and it was very unsuccessful. However, this one is supposed to be very easy to make and I like the combination of blueberries and rhubarb. I still won’t be making it myself as, being diabetic, I really don’t eat jam much at all – an occasional smear of spicy jam on cheese and I do mean occasional. 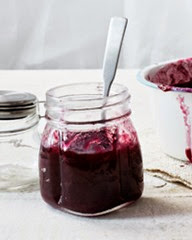 SERVINGS: 4 cups
Instead of strawberries, fresh blueberries are paired with rhubarb in this incredibly simple and delicious sweet-tart jam.

Make Ahead
The jam can be refrigerated for up to 2 weeks.

Email ThisBlogThis!Share to TwitterShare to FacebookShare to Pinterest
Labels: Blue-Barb Jam, The Churchills