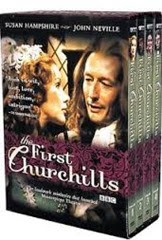 No, this isn’t the same post. However, thinking about Winston, I started remembering the TV show I saw in Britain in 1969 called The First Churchills, I mentioned this yesterday, and I later discovered that the series had been shown by PBS in North America and they had the DVDs for sale. I have a birthday coming up so I bought them for Matt to give me. I told him later LOL. I think there are 4 DVDs. Funnily enough I was watching this series when I first met Matt. It really was a fantastic series and John Churchill was a fantastic man. He earned his fame and was duly rewarded by Queen Anne who was a great friend for many years – she made him Duke of Marlborough and the family still retains the title. Winston was grandson to the 7th Duke. There is still a Duke, the 11th is 88 right now. Sadly his son has had a battle with heroin. I should also mention that the Churchill family is also related to the Spencer family from which Princess Diana came which makes them relatives of Prince William and Prince George.

One of my commenters yesterday, Pinky Poinker a blogging friend from Australia, talking about Churchill, mentioned her dad was born in 1935. Boy did I feel old, my husband was born in 1935. I guess a number of my cyber friends are young enough to have been my kids. When I was a kid, people of our age were considered really ancient and a lot of them had already kicked the bucket before even reaching their 70s. What a difference today when you see people of 101 dancing on TV and 90 year olds doing Olympic training, or bowling regularly, etc.

I like lima beans. They are the nearest things here to broad beans which are/were very popular in England when I lived there. Not sure why they are not available here. Used to be one of my favourites.

Humble limas are transformed into a sensational Mediterranean spread that is vibrant with a mix of fresh herbs and spices. You can substitute frozen edamame beans for the limas in Step 1; cook according to package directions.