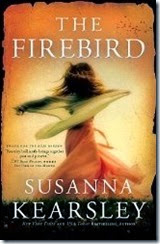 often I get an email from my library telling me of books they have recently received and are recommending. I just got a couple of them (my TBR is only 520 books). The first one I have just finished The Firebird by Susanna Kearsley. It is the tale of a young woman, Nicola, who has psychic abilities which she refuses to recognise – her job is in the art world. A Scotswoman is trying to sell an ornament of a firebird which was purported to have been given to an ancestor by the Czarina Catherine of Russia. There is no provenance but when Nicola touches the Firebird she knows that it is true and ends up setting out to prove the truth in a way that would be acceptable to those who don’t recognise psychic abilities. We end up with a story of Nicola in today’s world and Anna the ancestor who owned the Firebird, living in the 18th century. The background is strongly historical about the Jacobites of Scotland and how many of them ended up in Russia. It is a very interesting story and I enjoyed it very much.

Tuesday has been a very quiet day and apart from a news headline about a newborn baby being abducted from the hospital creche and immediately found by a couple of young girls, I haven’t much to write about.

One thing I did do, I blanched and froze a large bunch of asparagus. I enjoyed the ones I did last year so decided to do more. I might do another bunch before the season is over.

Here’s a somewhat different recipe from Food and Wine.

Asparagus with Toasted Almonds and Garlic 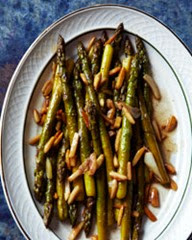 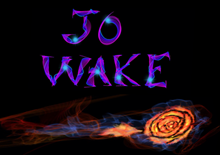