Wouldn’t you know it, just when I have decided to brush up my Spanish I end up 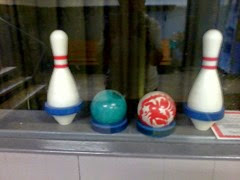 having a busy day. It got even busier Wednesday afternoon because we went bowling. We knew we would be downstairs as there was a league finishing off their winter season which ran over because of a snow day. Turned out that I knew a couple of people on this league one of whom is joining our summer league along with a

friend of hers. The more the merrier. Anyway, Matt and I ended having the whole of the downstairs alley to ourselves. Eventually another couple came and then a third guy on his own. We didn’t bowl too badly. Whilst there I took this picture above. I thought the pin for 10 pin bowling was the same size, but Googling, apparently it is a bit bigger. Anyway, for those who have asked me about it, you can see the size of the balls against pins, bearing in mind the balls can be held in the fingers as in the pic on the right, and weigh about 3 lbs. 8 oz. A major difference in the game is we use three throws to try and knock down the pins not 2 as done in 10 pin. The 5 pins count 15 points (one 5 pin, two 3 pins and two 2 pins) and a perfect game is 12 strikes scoring 450 in total. (I can never remember that number, I always say 400 odd).

food store. I saw some delightful looking golden mangoes which I picked up and gave them to Matt when I went into the pharmacy. He met me in the pharmacy carrying the mangoes and a couple of other things, I saw them. When we got home, the mangoes had totally disappeared. We haven’t a clue what happened to them. Luckily, when I phoned the store they said just come to the service counter and say they were left behind and they would be replaced. I guess two mangoes is chicken feed to them. Still, nice of them to do that for us.

Thursday (today) we are going bowling again. We are hoping we can cope as for the summer Towne Bowl are closed Monday and Tuesday and don’t open Friday afternoon. The league is Wednesday so unless we bowl at the weekend (which might be very busy) we have to bowl two days running. I might be moaning and groaning in my next blog.

I love things like the spicy sweet pork in the following recipe and have often prepared similar recipes. This one appeared in MyRecipes this week. I have the salmon for the recipe I posted the other day. Pork tenderloin we have in the Freezer. 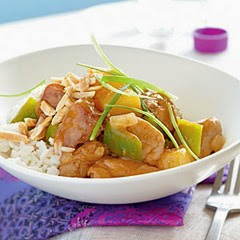