As you know, we love to watch Jeopardy. We are particularly enjoying the programme at the moment as there is a Champion, Julia Collins, who has now beaten everyone, other than Ken Jennings (74 games), with the amount of programmes she has won 19 at the time of writing. She has also picked up $410,000 odd in this time frame which the American government will be delighted to tax her on. To me this is totally wrong. Neither Canada nor Britain tax you on winnings, I don’t think the States should either. Of course you know the government will listen to me. Matt and I are both rooting for her.

Chatting to people at the bowling alley and we all agreed that the Canadian government shouldn’t tax pensions. When you think about it, we work all our lives, pay taxes in order to provide some of the money for pensions and then they turn round and tax us again. Meanwhile politicians get pensions which make ours look like chump change, and don’t talk to me about sports people.

ns. Skin cancer melanomas can kill and people are stupid to take the risk. That being said, Matt has had skin cancer and was told never to sunbathe without lotions, guess what, he takes no notice whatsoever. Generally they are saying vanity and a blasé attitude are behind the rise as well as the fact that we bare more skin than previous generations. I am lucky because I use various creams every day which all contain an SPF factor. Also in my opinion a lot of people stay in the sun too long as well. We do tan in short bursts, about half an hour at the beginning and then a bit longer as our tans build up. Not that we ever spend very long any more. Kind of get less interested in sunbathing when you get older, or we did.

Another goodie. Think I would be more generous with the asparagus, but then that’s me. 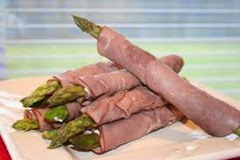 Easy to prepare appetizer of roast beef and asparagus rolled in a tortilla with a creamy spread.

Directions
Have a great day