No, I’m not starting the A to Z again.
I have just been reading a National 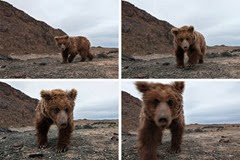 Geographic article about a very rare animal, the Gobi Bear. Apparently there are only two to three dozen left in the Gobi Dessert and scraping out an existence in one of the harshest climates of the world. There is a long article and a video about the animals and talking about the area where they live. They are one of the oldest bears in existence and their lineage can be traced back to the earliest brown bears. They are quite small bears and research teams have been catching them and tagging them as well as placing GPS collars on them. There are also bear feeding stations because the area where they live, which is in Mongolia, has been overused and there is little for them to eat any more. I wish I could help financially, but I am unable to do so. Maybe some of you can. 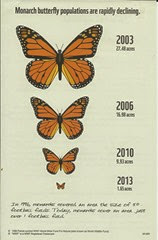 World Wildlife Fund today I had a request for assistance for the Monarch Butterfly who’s numbers have been seriously reduced since 2003. The size of the butterflies indicates the serious reduction in numbers and the area they cover. They also included a packet of seeds to grow a butterfly bush in order to attract them. Needless to say, we have nowhere to plant these so I am giving them to a friend. If she doesn’t plant them at home, she will do so at her son’s farm. I don’t know how big these bushes grow and I gather she hasn’t got that much room. At least she has a yard/garden which is more than we do nowadays.


Thursday we did our usual bowling, just three of us, for a fun afternoon. At least they tell me it’s fun, looking at my scores, I am not so sure about that. On Thursdays there is a women’s  league and we bowl along side them. They had their ‘banquet’ today which they cater themselves, mostly snack type foods. They came and told us we were welcome to dig in. I wasn’t going to but then I saw a couple of chocolaty things, that was my undoing. So, two of us helped ourselves, Matt did not. He is the only one who can afford to eat what he likes, not that our friend is overweight exactly, but she says she wants to lose a few pou 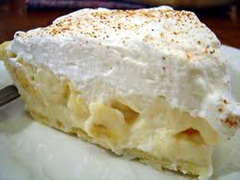 nds. Monday we had our bowling banquet for the winter league. It was catered by a local company run by a woman who is also a bowler. The food was excellent. It was slices of beef in a casserole which she served with delicious looking mashed potatoes (didn’t have any, but Matt said they were good), mixed vegetables, spinach salad, a jellied salad for those who like that kind of thing (she told me it is very popular in some of the old folks’ homes she caters) and also buns and butter. Afterwards there was a large selection of delicious pies, I had banana cream pie. There was lots of food and many went back for seconds. We then bowled, with distended stomachs plus had a prize giving. Our team won for the highest team single. Only thing we did get. Our summer league gets going on May 14.

I am ashamed to say I had forgotten that one of our number went an absolute purler after Monday’s events. He tripped down some steps into the parking lot. He is an 83 yr. old and bruised himself very badly. I was still in the alley when it happened, but when I came out I could see a small crowd around our car and thought for a minute it was Matt who was in trouble. On checking in with him today, it turns out he is OK but very sore.

After all the goodies I ate at the bowling alley, I could use this fish recipe. Wish I had all the ingredients handy.

Panko is the secret ingredient that makes these crispy, oven-fried fish fillets a family favorite. The lemon-dill sauce is the perfect compliment and great for dipping. For sustainability reasons, be sure to choose Alaskan cod, or substitute halibut or even tilapia. 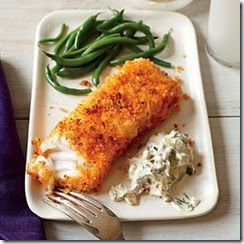 1. Preheat broiler to high.
2. Place egg whites in a shallow dish. Combine panko, paprika, onion powder, and garlic powder in a shallow dish. Sprinkle fish evenly with pepper and salt. Dip each fillet in egg white, then dredge in panko mixture; place on a broiler pan coated with cooking spray. Broil 4 minutes on each side or until desired degree of doneness.
3. Combine mayonnaise, pickle, lemon juice, and dill. Serve with fish and lemon wedges.