Scientists have found a giant planet circulating a dwarf star. This planet is further away from it’s star than has been seen before. At the moment they are not sure if it’s a planet or because it is so large, about 10 times larger than the biggest planet in our solar system, it could be a brown dwarf. I don’t pretend to be totally up on this kind of thing but I found the article interesting. The picture is an artist’s conception of the planet.

If you read the news pages at the moment, there is so much

violence going on. For instance, having lost 247 people in the Turkish mining accident, they are protesting and the authorities are shooting. Enough life hasn’t been lost already? Girls are being kidnapped, some because they are trying to get educated others from their school in Alberta by their mother, however, the girls are believed to be in danger. It is all enough to depress anyone. Sometimes I feel like crawling under the covers and burying myself so as not to hear what’s happening.

Then there’s bowling. Wednesday we started our summer league. Our team had a very disgraceful first game, I did OK in the second and another member of the team had an excellent third game, but for the rest of the time you would have thought all four of us had never bowled before. A few bowlers didn’t turn up and we didn’t know why, others had already said they wouldn’t be there. One poor guy had to bowl all on his own.

Luckily there is asparagus.

This recipe came from the magazine put out by our local Liquor Board, and is a somewhat high falutin’ recipe. If you have access to lobster, you are OK. 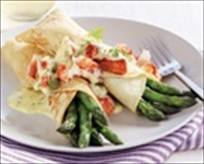 1. Preheat oven to 300°F.
2. In a large pot, steam or boil asparagus until just tender, about 10 mins, cool under cold water, drain and set aside. (If you have farm fresh asparagus it cooks in 2 minutes).
3. Coarsely chop cooked lobster, set aside
4. Prepare crêpes.
5. Divide the asparagus into 8 separate bundles. Place a bundle in each of 8 crêpes, sprinkle with salt and roll to enclose. Place asparagus in a glass baking dish, top with lobster and cover with foil. Just before serving, and no sooner, place in heated oven for 15 mins to warm through.
6. In a small saucepan over medium high heat reduce (boil) vinegar, water and 1/2 tsp salt until approximately 3 tbs remains, remove from heat.
7. Lower heat to medium-low, add yolks to pan and return to heat, whisking constantly until foamy and lightly thickened. Make sure not to scramble eggs; if the eggs begin to cook too quickly pull off the heat and whisk vigorously to cool slightly before continuing.
8. Begin to whisk butter into pan 1 cube at a time. Once all the butter is incorporated, whisk in lemon juice, white pepper and fresh herbs. Use immediately.
9. Place two asparagus crêpes on each plate and top each with some of the warmed lobster. Spoon hollandaise overtop, serve immediately