With regard to the plagiarism I wrote about yesterday, it appears that Laura Eno, who wrote the Jewel of Shaylar, is re-publishing the book under a new name Diamonds and Dust and under a new pen name, River Fairc

hild. However, another author friend of mine has said the following “One  doesn't change the name of an already published book, not in a place where it goes by another name, because people may buy it by accident when they already have a copy. And then you don't change the author's name either--not  without saying something on the cover. It's dishonest.” So, Laura this is good advice, I hope you will take it. I know I would have been really teed off to buy the book and find I already had it. I actually like the first name better anyway.

I had totally forgotten that November 5th is Guy Fawkes Day in England, I usually make some kind of comment. I like to quote the rhyme:

Remember, remember the 5th of November
Gunpowder, treason and plot
I see no reason why gunpowder treason
Should ever be forgot.

In England we celebrate by having big bonfires and burning Guy Fawkes in effigy, not sure why him, he wasn’t the principal in the plot after all. We also let off lots of fireworks. It was an evening I always loved, especially cooking baking potatoes in the bonfire which when we ate them came out half burned and half raw.

As I said, I had forgotten for the first time since I have been in North America, which is 38 years this month, at which time I will have spent longer here than I did in my native country of England. In some respects it doesn’t seem that long, in others it seems almost as though we have always lived here. Matt came at the beginning of October to

take up his job, but I followed on the 28th of October loaded up with 6 suitcases and a German Shepherd. We went to supper with English colleagues of Matt’s and despite having travelled all day, plus spent the evening out, although we arrived home at what was technically 3 a.m. for me, I didn’t sleep too well, we didn’t have a bed. We had a couple of duvets which I had been carrying, but that was it. The next day we not only bought a bed, but the salesman’s son drove it over that evening in his pickup. We were so very grateful.

I got a very simple slow cooker recipe from a friend at bowling the other day so thought I would share it. I am certainly going to try it soon. My friend doesn’t have a computer, but having Googled it looks as though this recipe comes from Allrecipes.ca. 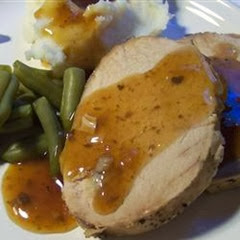 1. Place meat in slow cooker with the contents of the soup packet.
2. Pour water, wine and soy sauce over the top, turning the meat to coat. Spread garlic over the pork.
3. Cover and cook. Low 4 to 4 1/4 hours, serve with cooking liquid on the side as 'au jus'