Clocks Back, Polar Bears, Animation, Battle of the Bands.

Don’t forget to put your clocks back before you go to bed tonight.

We were only talking about polar bears in Churchill, Manitoba, a 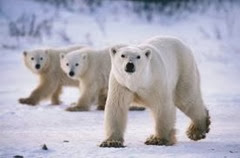 couple of days ago and now there is a report of people being attacked and two bears being killed. Poor bears, they are apparently returning to the area awaiting the ice to form on the water so they can go and hunt for food, the ice is forming later and later and they are hungry and agitated. Global warming is at fault once more. I don’t want people hurt by polar bears, but it’s our fault that the ice doesn’t form soon enough for them any more. Apparently earlier the trick or treaters were out and about and precautions were taken to ensure the bears did not come in to town. 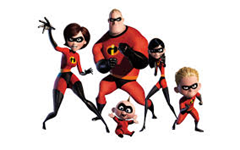 Last night I watched The Incredibles. I did watch it some years ago but had kind of forgotten what happened. I enjoyed it. Matt walked off in disgust. I think it is a cute film. This picture must be from the second movie as the baby is in costume too.

Talking of supermen, I actually played some of the music on The Battle of the Bands, on Arlee Bird’s blog he had Iron Man played by Black Sabbath and The Cardigans. Where do they come up with these names? I said it wasn’t my kind of music but Lee wanted me to listen to The Cardigans so I did. Having decided it wasn’t bad I thought I had better listen to the Black Sabbath. I preferred The Cardigans. Understand I know nothing about Iron Man, so none of it means much to me at all, but from the point of view of sound, I chose them.

As I am on a slow cooker kick at the moment here is a recipe from Betty Crocker that I like the sound of.

These ribs are a great main dish for when friends come over.
Makes 4 servings

Serve With
Ribs go great with deli coleslaw, biscuits and frosty mugs of beer.
Success
Spraying the inside of the slow cooker with cooking spray makes cleanup a snap.