Not a good day for bowling for me, a pretty good day for Matt and our one friend who came today. The other friend couldn’t make it, having furnace trouble. I have been telling him they should move into an apartment, so I got another dig in about this assuring him we were nice and warm and hadn’t spent a couple of days without heat. 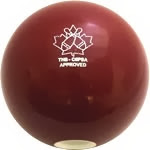 He wants to move into an apartment, but I think his wife is not so keen on the idea. Whilst we were bowling one of the owners showed us a thumb hole ball. I had neither seen nor heard of such a thing. The one he showed us was for a customer, but he had two in their downstairs alley and brought them up for us to try. All three of us did, but after playing with them for several frames, we all decided we much preferred our own balls. What we couldn’t understand was why the customer had ordered two balls, one with a thumb hole and one without. We all thought the thumb hole edging threw the ball off.

Took three pairs of pants to the tailor after bowling. Two to be taken

in and one, the pantsuit pants, to be shortened. Gonna cost me about $50 in total, but cheaper than buying new pants, particularly as I am planning to lose more weight. Although I am not doing too well this week. Thursday afternoon I bought a few chestnuts as I was hungry for them. Cooked a few in the microwave (having found a method on line) and ate them. One of the things I loved in Portugal was that you could buy roasted chestnuts in the streets. They used to do that in England but I hadn’t seen it in years.

Thursday morning we were visited by two women who are offering

to clean for us. They were a little more expensive, but from everything they said, I think they will do a really good job. I told them I would call them and when they had gone, Matt and I discussed it. We decided a definite yes so eventually we called them back and hired them. They actually asked for more money, but when I said it was too rich for our blood, they dropped to something we felt capable of sustaining. So that is a problem off our shoulders.

I thought I had posted this recipe before, but on checking it appeared I hadn’t. I have made this a couple of times because it’s so easy. The second time I made it in the slow cooker although because I wasn’t expecting to do that I ended up with too much liquid, if you want to use a slow cooker, don’t use the water and certainly cut down the tomato juice from the canned tomatoes. Actually, I didn’t use the water when I made it in a skillet. The ingredients also call for tomato sauce, I don’t keep that in cans and usually make my own but didn’t have any, so I subbed with tomato ketchup. Tastes fine. 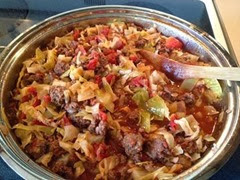 In a large skillet, heat olive oil over medium heat. Add the ground beef and onion and cook, stirring, until ground beef is no longer pink and onion is tender. Add the garlic and continue cooking for 1 minute. Add the chopped cabbage, tomatoes, tomato sauce, pepper, and salt. Bring to a boil. Cover and simmer for 20 to 30 minutes, or until cabbage is tender.