Incredible, on Friday it snowed, and snowed leaving lots of the white stuff. Saturday night it rained and there isn’t a scrap of snow left anywhere. It was still raining when we got up on Sunday morning. A lovely day in fact it drizzled for all of it and was quite chilly. 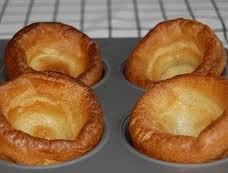 Saturday I didn’t do much of anything. We had taken out a rib of beef to cook for dinner and I realised we didn’t have any frozen Yorkshire puds. Matt didn’t want to go to the store, so I talked him through mixing up the batter and we made some individual puds ourselves. I have never made Yorkshire puddings in muffin pans before but I’m pleased to say they worked very well. I put a bit too much mixture in a couple before I figured it out, but they turned out OK in the end. I also talked him through the gravy where I put a load of veg and herbs to cook in water and then add wine and Bisto later. The result was, our dinner was good. We had a bottle of Chilean wine which made it even better. Of course we had roast potatoes, Matt always does those, and flat green beans which I slice. It was a co-operative effort.

I couldn’t shower til Monday so I wasn’t very happy. PTA bathing doesn’t work as well. I needed to wash my hair too it was looking yukky. So you can imagine how delighted I will be to shower today. I didn’t tell 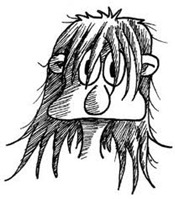 you that this time they were unable to put a plug in my artery (a decision that has to be made on the operating table apparently) and they had to stop it bleeding with compression. Lots of it. Hours later, once I was allowed out of bed, I had to compress the wound area every time I got up or sat down and I have to do this for 2-3 days. It’s a bit of a pain to do, I forget now and again as well. I think it is probably OK now, but I am trying to be compliant for the full time I wouldn’t want to have to call the ambulance. I was told to put pressure on for 10 minutes if it did start bleeding and if that didn’t stop it, to call 911. I guess being a major artery, one needs to be very careful. I suppose that’s more than you wanted to know, sorry.

Couple of other blogging friends have had messages from Blogger saying they have run out of space for their pictures, one has been downsizing her pictures,

seems to work. The other deleted a whole bunch and says that didn’t do anything. Meanwhile I had a message about maybe half a dozen of my blogs, most going back years ago, as infringing copyright. I was supposed to receive a memo about it. I didn’t. Eventually, having hard copies of them all, I just deleted them. Appeared to dispose of the problem. Blogger seems to do some funny things. Rather like the Adsense advertising, lots of people, including me, were taken off the advertising list for some unknown reason which was never stated. One person had been using Adsense for years, he didn’t use pictures at all but suddenly they took him off their list. He had no idea why either. There doesn’t seem to be anywhere you can go for a proper answer to the problem. I assume most of it is done automatically, so if it goes wrong, no-one does anything about it.

I thought this sounded like a good steak recipe.

This is a great way to take a not so tender steak and turn it into something fantastic. This round steak is marinated in a flavorful mixture, grilled hot and fast, and carved into think strips. 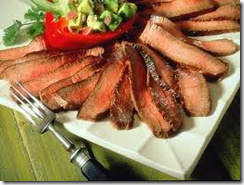