The Connecticut tragedy illustrates, once again, the unwisdom of such freedom of gun ownership. It’s a never ending argument, the pro gun people will defend their right to o 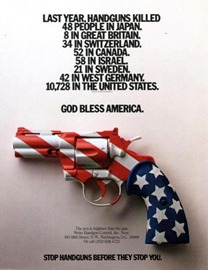 wn guns to the bitter end. One woman commented on Facebook about protecting her family – if those had been her kids, how would her ownership of guns have protected them? She wouldn’t have been there. If guns were not so readily available the shooter, on this occasion in particular, would not have had access to them. Yes I know its not guns that kill it’s the human who does the killing, but if people don’t have such easy access to guns, it is so much less likely to happen. Statistically, gun toting America has far more shootings than other countries of the western world, but the pro gun people cannot seem to see this.  A friend in the States insisted that he would defend his guns to the death even if police tried to take them away. I cannot understand such an attitude. This picture was on Facebook it has statistics showing a vast gap between gun deaths in the US and a lot of other countries, I am not sure how current the figures are, but the point is still apparent. Sunday morning we heard a report telling us that there are more gun stores in the US than there are MacDonald’s and that there are some 200,000 guns in the US. Opinions differ widely, but most of us from other nations feel tightening gun laws would be a positive move. One blogging friend, Viveka at My Guilty Pleasures, talked about violence on TV and the movies. I do agree that I think young people see so much of this and know that the actors get up and walk away, therefore that will happen when real people get shot or beaten up. It skews their perceptions I think. Viveka also talked about the terrible shooting of children in Norway; it does happen elsewhere, just not as often. Whatever our opinions, our sympathies and heartfelt condolences go out to the families of the victims at this latest massacre.

Today is our Christmas ‘banquet’ at the bowling alley, we have lunch and then

bowl some fun games rather than regular games. Usually we bowl one game of bingo and the alley hands out some Christmas goodies – I have more Christmas ornaments than I can shake a stick at received from the alley. Then we won’t be Monday bowling until January 7.  We have one more Friday bowling, but I am not sure about the other two Fridays, probably most people will be too busy celebrating the holidays.

I challenged our local radio station DJ, Randolph J. Johnson, to find a recording of a carol we used to sing when I was young. The first line is “All this night shrill chanticleer”. Very few people have heard of this carol and yet I always loved it when we sang it at school. Matt is always astounded when I mention it because he sang all kinds of carols as a boy chorister but has never heard of that carol either. I know the tune, but my signing would knock you dead. I don’t know if RJ took up my challenge or not, haven’t heard anything from him. For those of you who don’t know, chanticleer is often a term applied to a rooster.

I thought this would be a nice change from my usual recipes. All the highlighted items can be made at home, or bought in stores which specialise in Indian foods and spices. The curry powder frequently sold in regular grocery stores is somewhat bland compared with what you can obtain in specialist stores, their products are full of flavour. Of course, if you live in the UK, you can probably get all this from your local Indian takeaway.

By A Nutritionist Eats 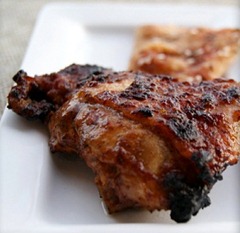