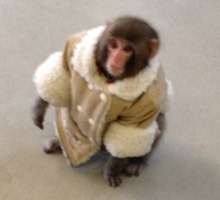 Apparently they did take away the monkey in the shearling coat. Although keeping one in Toronto is against the law, I don’t think its very fair on the monkey. It will miss its owners. At the moment he has been transferred to a primate sanctuary near Toronto. Apparently the little monkey, a macaque named Darwin,  is only 5 months old, there are some videos here of Darwin behind bars, he looks somewhat lost. I see there is now some discussion about exotic pets laws, personally I think the more efforts to clamp down on exotic pets the better. It is a trade I am very much opposed to and sadly all the while people want to buy them, others will wrest them from their habitats to sell them.

Scary news that North Korea has just launched another rocket – I am not sure what the world can do about it.

Of course next week, according to the Mayans, is the end of the world. There is a 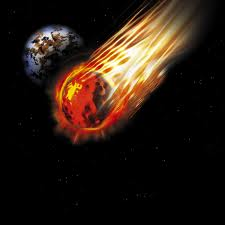 post going around on Facebook pointing out that the Mayans couldn’t/didn’t predict the arrival of the Spanish which effectually ended their civilisation. However, there was a new asteroid which was only discovered a couple of days ago and which passed pretty close to us. That makes me wonder if there is another one they haven’t discovered yet. Not to mention the ones they know about. My friend commented that she hadn’t decided what to wear for the end of the world, I suggested her birthday suit, she thought that was uninteresting LOL. There is another article here which carries a map of all the asteroid hits identified since 1950.

Amongst the many things which bug me are the alterations in carols. For instance, in We Three Kings4, the chorus is Guide us by the Ancient Light and NOT guide us to thy perfect light. The star is giving light to guide the kings for goodness sake.

I love pecans, used to get lots of them when we lived in the States. Friends had pecan trees although the hurricanes used to get those just when the nuts were about ready to pick. These look like a gooey Christmas treat.

Source: Food and Wine at Cooking.com

These delightful nut bars, inspired by a recipe from Ken Oringer's mother-in-law, are both gooey and crisp. Oringer sometimes adds a pinch of curry powder to the 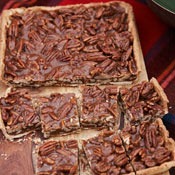 caramel because, he says, "I like for people to bite into these and wonder what the spice is. I love that element of surprise."

In a food processor, pulse the flour with the sugar and salt. Add the cubed butter and process until the mixture resembles coarse meal. Sprinkle on the ice water and vinegar and process until the crumbs are evenly moistened. Turn the crumbs out onto a sheet of wax paper and knead just until the dough comes together. Pat the dough into a disk, wrap in plastic and refrigerate until slightly chilled, about 15 minutes.

Preheat the oven to 375°. Line the bottom of a 9-by-13-inch metal baking pan with parchment paper. Roll out the dough between 2 sheets of wax paper to an 11- by-15-inch rectangle (1/4 inch thick). Trim the dough to a 9-by-13-inch rectangle and place it in the baking pan. Cut the remaining dough into 3/4-inch-wide strips and press them up the side of the pan to form a rim all around. Refrigerate the dough until firm, about 30 minutes.

In a large saucepan, combine the butter, brown sugar, honey and salt and cook over moderate heat, stirring, until foamy and slightly thickened, about 10 minutes. Add the curry powder (if using) and cream and cook, stirring occasionally, until a candy thermometer inserted in the caramel registers 240° (soft ball stage), about 10 minutes longer. Add the pecans and cook for 2 minutes longer. Pour the filling over the crust, spreading it evenly. Bake for about 15 minutes, until the crust is golden and the topping is bubbling. Let cool completely. Slide the parchment onto a cutting board. Cut into bars and serve.