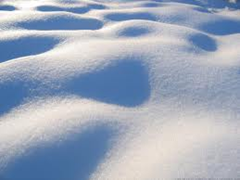 We figure we got about 2 inches of snow on Boxing night. Suffice to say it was enough to stop Matt going shopping at the crack of dawn on Thursday. He went somewhat later. There isn’t a lot of traffic around because the school is closed – I supposed the buses were running, but didn’t see that until later in the morning. By the afternoon the sun had really been shining so the roads were pretty clear although the park still looked lovely and white. Pity it didn’t come Christmas Eve. Matt was watching something on TV the other night about the formation of ice crystals to make snow, unfortunately I was doing something else so didn’t really catch much of it. It really is incredibly complicated how snowflakes form.

I have been reading some delightful books by Samantha Young, Fire Spirits is th

e name of the series, I have read three and thought it was a trilogy but there is at least one more in the works to be released some time next year. The first one is called Smokeless Fire, then Scorched Skies and Borrowed Ember. The books are full of Jinns of all kinds including 7 Jinn Kings. Not very nice creatures at all. There is also a love story between 18 yr old Ari and her guardian Jai. I got the first and second books, for my Kindle, totally free. I am only disappointed book 4 is not yet ready for release. I get an email from Pixel of Ink every day listing specials and freebies available on Amazon. Saves looking for them oneself. I’ve actually found several books, trilogies or series I enjoy from reading this email.

I finally ordered myself a new phone for my computer room. I didn’t want anything elaborate or expensive and ended up with a cordless which is costing me about $30 with tax and delivery (I paid for faster delivery). The one I am using right now is driving me batty. I never realised how often we end up with phone calls where we have to press this number and then that one.

We have gift certificates to a restaurant and discovered a couple of friends had the same certificates. We

had discussed going together. However they phoned to say they planned to go on New Year’s Eve. We were tempted, but it’s a fair drive to where they live and that branch of the restaurant and we are both a tad nervous about doing a lot of driving on that particular night. Despite all the campaigns there are still a lot of idiots who drive drunk, particularly on New Year’s. So, I think we will stay home and have a good meal and then maybe toast the New Year or maybe this year, be a couple of wussies and go to bed.

I don’t know how many are planning to entertain for New Year’s Eve, but this recipe seemed to me an absolutely ideal one for an entertainment.

An impressive addition to any buffet, this puff pastry parcel is filled with fish in a creamy parsley, dill and lemon sauce 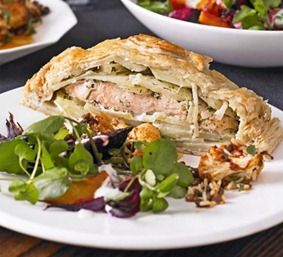