across this article the other day and it made me wonder. New research is saying statins can increase the incidence of osteoarthritis in the knee. I personally am taking Lipitor for cholesterol although I cannot tolerate much of it because it gives me major cramps, as do all statins and any cholesterol drugs. However, although I have a low dosage I have started having problems with my right knee. I intend to bring this up with my internist at the next visit to see what she has to say about it. Matt too is on a statin and had a replacement knee before he was put on the statin. His other knee seems to be doing OK.

I don’t know where I‘ve been, other than in hospital for a day, lately, I have just 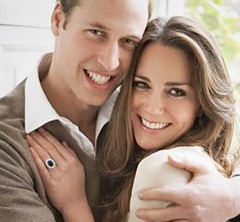 discovered it has been announced that the Duke and Duchess of Cambridge are expecting a baby. Apparently the British bookies are offering 10/1 odds on the baby being a girl and similar odds for it being a boy. Guess they have a 50/50 chance of being right. I haven’t seen anything on the acceptance of the inheritance change stating that a first born girl can inherit even if a son follows. I obviously must do some looking into this. So then I went on Facebook and it is all over the place including the fact that the Duchess is suffering from an extreme form of morning sickness and has to stay in hospital for a while. The baby is due next year obviously, but I didn’t see an approximate date anywhere.

Yesterday I was asked about favourite Christmas recipes. I don’t really have any. We didn’t bake cookies when I lived at home and I don’t think I knew anyone that 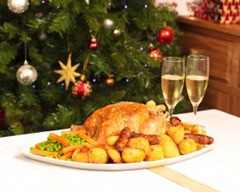 did. We always had lots of nuts and chocolates around, but not cookies. Of course we always had a Christmas cake full of fruit and flavour which had marzipan and icing on it. for some reason fruit cake is treated very scathingly here with lots of jokes made about it, but I used to love it as did my family. My mother always made a cake and for many years, so did I. Matt, however, is not a fruit cake eater. Our main concentration was on the Christmas meal, usually a roast turkey stuffed with a sausage stuffing in the main cavity and chestnut stuffing (my favourite) in the neck end. With the turkey we would eat bread sauce, French style gravy, roast potatoes and Brussels Sprouts. This would then be followed by home made Christmas pudding with which we would have rum butter or, for my mother, cream. That is thick cream (no not Devon cream) but thick English cream that one could get anywhere. Boxing Day 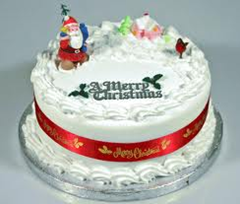 was a roast leg of pork with the crackling on it (keep the pork just give me the crackling) served with apple sauce – as a sauce not a side – gravy, roast potatoes and Brussels again. Usually followed by the rest of the Christmas pud. Occasionally we might have goose, in fact I often cooked goose for Christmas Eve when I was first married. Many people chose goose for their Christmas dinner. Sadly, ducks and geese are extremely expensive over here so we never buy them, but if I go to a restaurant with duck on the menu, its usually my first choice. I just remembered chipolatas, small sausages, I don’t think we had them very often, but they were certainly a staple of Christmas Dinner in many British homes. In my home, on Christmas Day, we always had cold, thinly sliced ham for breakfast (cooked similarly to yesterday’s recipe) with Colman’s mustard and champagne. After marrying Matt that became champagne cocktails. Same breakfast on Boxing Day. Then we would have our main meal around 2 p.m. and later have turkey sandwiches and cake for our supper. Not sure what we did for supper on Boxing Day. Maybe cold pork?

Here is a really Christmassy recipe from Kraft, I won’t be making them as most, if not all of them would go down my throat. I can eat quite enough of the wrong things without actually making any. I’m going to try making the Strawberry Santas I posted recently. 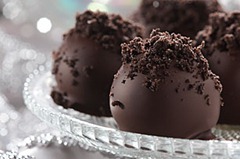 REFRIGERATE 1 hour or until firm.

Use a toothpick to dip the cookie ball into melted chocolate; shake off excess chocolate then place on waxed-paper.