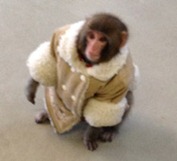 Did you hear the story about the monkey running around the Ikea parking lot in Toronto on Sunday? The story even made it onto Good Morning America on Monday. The monkey was eventually reunited with its owners, but it appears that owning monkeys as pets is prohibited in Toronto but the police haven’t laid any charges. One wonders why not? The monkey was dressed in what is described as a miniature shearling coat and was apparently hunting for its owners who were shopping in Ikea at the time. Shows how much I know about fashion, I had no idea what a shearling coat was/is. Having Googled it, I find its what we used to call a sheepskin coat and Matt has had one for almost 40 years, still in excellent condition. How come a monkey has a better coat that I’ve got? No the animal, not the hubby.

I am delighted to report that I bowled really well (except for the first game which we won’t talk about). Obviously I was quite chuffed. Matt, unfortunately, had a bad day. That’s how it goes. At least we get some exercise out of it. One of our team members, who’s average is 124 bowled a 183, she was thrilled to bits. Its very exciting when you have such a good game.

Having cooked lamb at the weekend I discovered I had run out of mint sauce, not

jelly, sauce. I can’t stand the jelly stuff. I want the good thick minty sauce that only appears to be made in the UK. Anyway, we stopped at Vincenzo’s on the way home; the assistant I asked thought I wanted the jelly, I assured her that I didn’t but presumed the two would be together, it was, so I was OK. Matt doesn’t eat the sauce, but to me its not lamb without mint sauce. We usually get it at our local grocery store, but haven’t seen it there lately. Knew Vincenzo’s would have it though, they have everything. I also found some pita chips which will save me making some for Wednesday when we are having some bowling friends over for cheese and wine. I want to open the packet and check them out but Matt says they will go soggy if I do; in an airtight container???

Last night I did my Christmas thing and watched Miracle on 34th Street. The original one. Which I thoroughly enjoyed yet again. Matt thinks I’m a big kid. LOL.

I have always loved Brussels Sprouts until recently when I went right off them along with a lot of other foods, doc put me on thyroid medications and I haven’t yet tried Brussels Sprouts. When I saw this recipe, thought I might give them a go.

These tangy horseradish-cream-topped Brussels sprouts are just the thing to serve with corned beef and potatoes, or alongside a holiday ham or turkey. Look for sprouts with tight, firm, small deep-green heads; if they’re still on the stalk, so 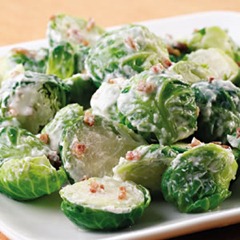 much the better. To prepare, peel off outer leaves and trim the stems. Double it: Steam the Brussels sprouts in a Dutch oven instead of a saucepan.

DIRECTIONS
Place a steamer basket in a large saucepan, add 1 inch of water and bring to a boil. Put Brussels sprouts in the basket and steam until tender, 6 to 8 minutes.
Mix bacon, sour cream, horseradish, salt and pepper in a medium bowl. Add the Brussels sprouts and toss to coat.