Friday night it blew and blew and blew and then Saturday morning it snowed and it was still blowing. Still we didn’t get a stack of tornados like they did in the States. Lots of people killed. We do get tornados in Canada, but not like the central States where it can be deadly. Lets face it, The Wizard of Oz was based on typical Kansas weather.

Reports coming in about the tornados are pretty horrifying. Kentucky, for instance hasn’t had such tornados in 40 years. In one town in Indiana a 2 yr. old was discovered alive where all her family were dead. She is in critical condition in hospital, she has one relation beside her. If you want to see the Good Morning America reports go to the ABC news website. There is some good video footage. School buses driven into buildings, and cars turned upside down. Whole towns wiped out and so on. The death toll is about 30 at the moment, lets hope it doesn’t increase.

Once again on Facebook. A friend posted a link to incredible high resolution images of the moon which have been put together to make a fantastic video with music and explanations of what you are seeing. The video shows just what the moon will look like all through 2012. Very cleverly done.

If you go to the White Wolf Pack site it gives a lot more detail about the way this video was made.

After all these years, I got to see Andrew Lloyd Webber’s Phantom of the Opera

last night on public television. The Phantom was played by Ramin Karimloo an Iranian born Canadian actor with Sierra Boggess as Christine. The production was coming from the Royal Albert Hall in London and was performed as the 25th anniversary of the show. I have known and loved the music for years of course, but have never had the opportunity to see the show. Lots of tears. I loved it although I wish I had been more familiar with the libretto for some of the scenes where everyone sings at the same time. They had brief interviews with Karim and also Colm Wilkinson who was one of the early Phantoms playing in Canada. We turned off the TV before the end of the production, not the show itself, but where they bring on all the previous cast etc. I believe Michael Crawford put in an appearance. The show has been running for a long time in New York, it has outrun many well known shows apparently.

I don’t often cook a beef roast but did this weekend and thoroughly enjoyed it.

Somehow, although its still beef, a roast, cooked in the English style which I believe is referred to as dry roasted over here, has such a different flavour and with some good gravy, makes a delicious meal. I wish I had planned in advance as we could have bought some frozen Yorkshire puds. I don’t make them any more a there are only two of us, the the President’s Choice version are excellent and take 4 mins from frozen in the oven. When I was at school they used to serve us Yorkshire pudding and then for dessert we used to get it again with syrup. I loved that.

My Eating Well email this weekend was talking about healthy breakfasts, it is always stressed that you should eat well at breakfast time and it will set you up for the rest of the day. Here is an oatmeal recipe which appealed to me.

Perk up your morning oatmeal with the addition of tangy rhubarb. Using milk for 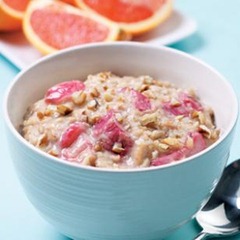 this oatmeal gives it a calcium boost, but the recipe also works well with water—and you’ll save about 60 calories.