Just been reading an article which says that not only did the Great Lakes not freeze this year with only thin amounts of ice close to shore, but that the Lakes themselves are losing ice cover and it has been declining for a number of years which means that there will be more evaporation from the Lakes and therefore less water in them which will not only affect fish but also navigation if there isn’t enough water for some of the ships which currently ply the Lakes. Some Lakes have lost more ice coverage than others with Lake Erie and Lake St. Clair (not a Great Lake but between Huron and Erie) having lost the most. I think it could have more serious consequences, I remember reading in a book I have called Land of the Inland Seas, which was about the Great Lakes, that if it wasn’t for their existence, man could not live on this Continent. Of course global warming comes into this equation but isn’t totally to blame I gather. For Europeans, if you haven’t seen the Great Lakes, you just cannot imagine how huge they are. We have travelled by ferry on some of them, and this has given us some idea. But then we Europeans cannot conceive just how big Canada is, but I can assure you it is vast and in the north there are great wildernesses with nothing but trees and lakes. In fact my mother once commented, when travelling in Canada, “you can get sick of trees can’t you?”.

has started a furor around the publishing world. The book, The Light Between Oceans, is M. L. (Margot) Stedman’s first and it was the subject of a bidding war so we are told. The author herself doesn’t want any publicity as she wants people to read the book without any influence, she says the book is not in any way autobiographical so who and what she is (a lawyer) is nothing to do with her book. The book itself is not being released until August. I must watch out for this sounds interesting. 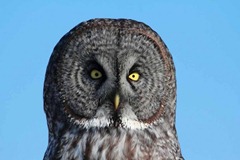 Fascinating story of a Great Grey Owl which has taken up residence in Kingsville, Ontario, which is way out of his normal range. It has been drawing birders from all over the Province who are anxious to see the bird. If you check the article there are pictures and video taken of the visitor which 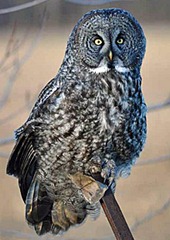 might decide to continue living here. It is the biggest species of owl living on this continent and is rarely seen south of Lake Superior but has been spotted in a supermarket parking lot and on nearby rural country roads. The location of the sightings is somewhat south of here and not far from Point Pelee which is a well known birding area which draws hundreds of visitors every year when birds are migrating and visiting that area on their travels. I think I should perhaps persuade Matt we need to take a trip although we have so many damned medical appointments I guess it won’t be possible. 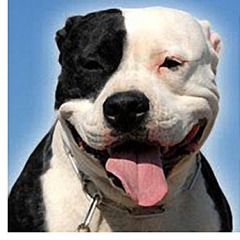 Having known a couple of pit bulls who were as soft as butter I have never subscribed to their bad press. Once upon a time German Shepherd Dogs used to get the same bad press and when various stories were investigated it turned out that the reporter had not told the story accurately trying to dramatize the incident and make it exciting to read. Well here is a reporter telling a different story about a woman leaving a playground with her 2 yr. old when she was attacked by a man with a knife. A stray pit bull, unknown to the woman, rushed up to defend her and drove off the man although he didn’t actually attack. Yay pit bulls. Do read the story. The woman says if he doesn’t have an owner she will adopt him as her angel.

Wednesday night we watched the latest show from Celtic Thunder, Voyage. It was 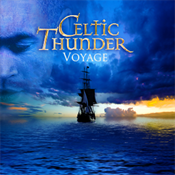 very good, as usual, Paul and Damian are no longer with the show, but George, Keith and Ryan are still there and there are some new guys, Neil Byrne who was originally in the band, these days he both sings and plays, Emett Cahill whom I haven’t seen before and Daniel Furlong who is 13 years old and has a delightful voice. He has apparently been singing for 6 years in public. They are offering tickets to shows in both Hamilton, ON and Buffalo, NY in September, but hopefully we will be on vacation at that time so we won’t be able to go. Not sure we could afford it anyway at $300 a pair of tickets although I guess it could have been my birthday present.

I’m not sure just how authentic this stew is which calls itself Provençal. I would say some of the flavourings are not the usual in the south of France, nor have I ever heard of putting leek in a bouquet garni, however, it does sound like a pretty good stew just the same. 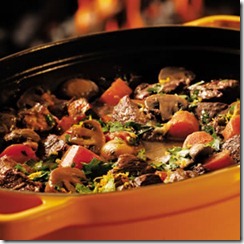 The flavors in a slow-cooked beef stew improve as it sits for a day or two, so it is a perfect make-ahead for a dinner party. Buy nicely marbled meat, such as chuck, for this recipe.
Make Ahead Tip: Prepare through Step 8, let cool to room temperature, cover and refrigerate for up to 2 days. Reheat at a gentle simmer on the stovetop for about 30 minutes or in a 350°F oven for 1 1/4 hours before serving.

To assemble bouquet garni: Place one leek leaf on the counter. Top with bay leaf, celery stalk, parsley sprigs, thyme sprigs and tangerine (or orange) peel. Place the second leek leaf on top and tie the bundle together in four spots with kitchen string. Set aside.

To prepare stew: Heat 1 tablespoon oil in an ovenproof Dutch oven over medium-high heat. Add pancetta (or bacon) and cook until barely brown, 1 to 2 minutes. Transfer to a paper towel-lined plate, leaving any drippings in the pot.

Add beef in batches (do not crowd the pot) and cook until browned on all sides. Transfer to a large bowl and season with 1 teaspoon salt and 1/4 teaspoon pepper.

Reduce heat to medium and add the remaining 1 tablespoon oil to the pot. Add mushrooms and cook, stirring occasionally, until they are tender, 5 to 7 minutes. Transfer to a small bowl; set aside.

Pour wine into the pot and bring to a boil, scraping up any browned bits. Return the browned beef, the carrot mixture and the reserved pancetta (or bacon) to the pot along with the bouquet garni. Press down on the beef and vegetables, making sure to submerge them completely in the wine; if necessary, add just enough hot water to make sure they are covered. Cut a piece of parchment paper to fit the pot and press it directly on top of the stew, covering it completely.

Transfer the stew to the oven and cook, with the lid off, until the beef is tender enough to cut with a fork, about 3 hours. Check every hour to be sure the ingredients stay submerged in liquid during the entire cooking time. If too much wine evaporates, add a little hot water to make up for the loss. During the last 15 minutes of cooking, stir in the reserved mushrooms.

Remove and discard the bouquet garni. Combine chopped parsley and tangerine (or orange) zest in a small bowl and scatter on top of the stew just before serving.