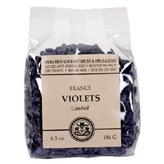 I forgot to mention yesterday that I had found a source for Candied Violets at Amazon.com, not that they will ship them into Canada. For a 6.5 oz. bag of violets you would have to pay $64.62. I just about fell off my chair. Almost as expensive as Saffron. The violets are apparently made in France. I didn’t ask at my local deli store, Vincenzo’s, how much they charge, but I don’t think I want to know, I will just make ‘em myself. When I used to buy them in England I don’t remember they were any kind of expensive like that, but then I certainly wouldn’t have bought as many at one time. I’ll have to get myself properly set up and the next time my violet decides to flower, I will be ready to make my own. Pansies flower more often so I had better get ready anyway.

Great story in the news, James Cameron a photographer for the National 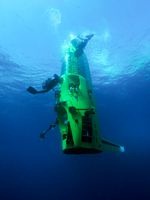 Geographic has completed a torpedo submarine dive into the Mariana Trench thereby creating a record for being the first to dive so deep, 6.8 miles. I am wondering what kind of photographs were achieved as it would have been so very dark down there. We will no doubt see them soon. My only problem is that to surface they had to dump metal plates from the Challenger which means large lumps of metal deposited in a pristine environment. Pity they couldn’t think of some other way to achieve ascent. It is still an historical event and one that will go down in history books.

Talking of environmental things, there is something of a furore about Donald Trump’s sons and their recent hunting trip in Zimbabwe. Matt says its because of who they are, maybe, but nobody would have known about it if they hadn’t posted pictures of themselves with their trophies. This one of Donald Jr. shows him holding the tail of the elephant he has just shot, you can see the elephant in the corner. Most people seem to be disgusted and contemptuous about the whole thing. In the blog of Ben Travoto – The Whipping Boy he has written an open letter to the Trumps which I think is excellent. They are saying the money goes towards conservation – you shoot to conserve? Couldn’t daddy have just made a major contribution to the cause, $50 million or so would be good.

Wonders will never cease, I bowled well yesterday. Twice in a row, the way things have been lately, that is incredible. Before we started, we were chatting to our 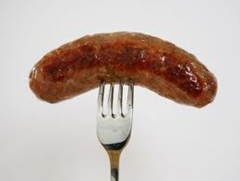 team captain who said she wouldn’t be there next week because she was going to help her mother ‘put up sausage’, it turns out that what her mother has been doing for many years is making sausage from pork butchered by her son and then smoked and then made into sausages. She then cooks them, and stands them in clean jars which are filled with fat, then turned upside down for storage. I guess They last years apparently and taste as though they had just been cooked. I had never heard of this before and was fascinated Wikipedia has never heard of it either. It turns out people did the same with chickens although as our captain said, if her family wanted chicken they just went to the barn and got one. I have asked for some pictures. She was telling us a number of fascinating stories about her family and living on a farm. I said she should write it all down for her kids. I very much regret I don’t have the stories my father used to tell when he was alive.

This is what we are planning to have for supper tonight so I thought I would share it with you. 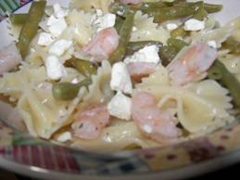 Heat the oil in a large heavy skillet over high heat and sauté the garlic for about 1 minute. Add the green beans, tomatoes, and wine and bring to a boil. Reduce the heat and cook covered until the beans are tender but still crisp, about 10 minutes. Add the shrimp and lemon juice and top with the feta cheese and cook covered until the shrimp are pink and firm to the touch, about 5 minutes. Serve on top of cooked rice or pasta. Serves 4 to 6.