Uh Oh, something I hadn’t thought about, but according to this article the bugs may be hitting us earlier this year because of the mild temps and early arrival of spring. In fact, people keep saying they are sure we will get one more winter blast, maybe that would be a good thing if the biting bugs are already out, they too might get zapped by the cold weather. The article particularly mentions 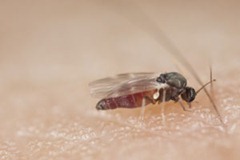 black flies which so far, I have never encountered, not having been further north in black fly season, but from all I hear about them, I really don’t want to meet any black flies thank you. Mosquitoes are more than enough and they are everywhere. I am one of those people who are particularly attractive to mozzies – I can sit next to Matt and get eaten alive and he doesn’t get one bite – he swears it’s the tonic in his G & T. I was told by a local in the Dominican Republic that it was because I had a high concentration of Vitamin B which attracted them. Not sure how you get your body not to produce Vitamin B and do I want to anyway. All power to the people who

allowed these bugs to bite them in order to get a good picture. I’m damned if I would have stood still for that. That reminds me, I talked to my foot nurse about bed bugs and it appears she is super fussy and when she goes to a hotel, which she does frequently, she strips the bed to be sure there are no bugs on the sheets. There appears to have been a plague of the stupid things in North America in the last couple of years. They truly make me feel sick. Yuk. Almost wish I hadn’t included this last part.

Very sad story in the news, a 3 yr. old female orca has been killed in an explosion

which they believe was caused by the US military although they deny it. The whale washed up on the coast of Washington last month. Scientists believe other whales could have been killed at the same time. There were 38 seals killed last year as well and scientists are very worried about the endangered pods of orcas which could be wiped out with these blasts. I can’t believe anyone would carry out underwater explosions in areas where such things can happen.

My  apologies that I didn’t post a complete recipe yesterday, it was pointed out to me on Facebook so I added the salad dressing so now its OK. I have kind of been concentrating on dinner for Saturday, have guests coming, so my mind must have been elsewhere, sorry about that.

The reminders are coming in thick and fast for Earth Hour on March 31 when we are all supposed to turn off our lights for one hour at 8:30 p.m. I was all set to do so last year and somehow forgot. Shame on me. I will be sure not to forget this year. The idea behind it is to raise awareness of all the things we need to do to protect and cherish the earth we live on.

I have never used tomatillos, I really don’t know very much about them. I guess this would be a good chance to try them. 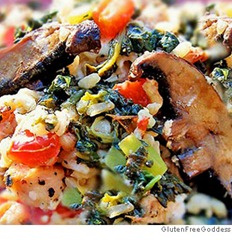 Looking for weeknight supper ideas? This super simple toss-together recipe is budget-friendly and versatile. If you don't have chicken on hand try using pieces of cooked turkey or your favorite sausage. Vegetarian? Use a can of white or black beans instead. The Mediterranean and Santa Fe -- thanks to the fresh and unexpected spike from tomatillos -- flavors in this fabulous recipe cozy up to a parade of proteins.

A family favorite from the archives, this is easy comfort food to bake and savor before the fall begins its alchemy, spinning green into gold.

You'll love the combo of tomatillos and spinach. The citrus zing of the tomatillos adds a definite zip to the usual greens.

Thaw the spinach a bit (and pat dry if necessary) so you can scatter half of it in the bottom of a large baking dish. Sprinkle half of the tomatillos, tomatoes, and garlic on top. Season the mixture with sea salt and lemon pepper. Scatter half the cheeses.

In the meantime, heat up a large skillet and brown the chicken breasts in a little olive oil. Season the mixture with sea salt and Lemon Pepper.

Remove the chicken from the pan and cut it into bite-size pieces.

Sauté the Portobello slices in a little olive oil and good splash of balsamic vinegar, till tender.

Add the cooked chicken and the Portobello to the spinach mixture. Spoon on the rice. Top with the remaining spinach, tomatillos, tomatoes and garlic. Add the remaining sliced mozzarella and goat cheese. Put the pan in the oven. Bake until done, about 25 to 30 minutes, till heated through.

Light a few candles and gather for a feast. This will serve six.