I don’t believe this, Malawi are looking into making public farting criminal. Its insane – I can’t imagine anyone talking about this seriously, but apparently they are. They will be arresting a lot of elderly people I fear. I don’t think anyone really likes farting in public, but there are times and conditions which make it totally impossible to control

and to talk about criminalizing it is absolutely ridiculous. Now I read on Google that California has banned public farting. To me this sounds like a joke. Yes, I’ve come across people who like nothing better than to disgust the rest of us, but generally that isn’t in public, but basically it is a natural bodily function and certainly cannot always be stopped. What are they going to do about animals, we used to own a dog who could really let rip.

Can you imagine, a man admits to killing his own children in 2009 because he was upset due to his failing marriage and now the courts are considering releasing him on the advice of a psychiatrist who says he is a changed man. Guy Turcotte was a doctor and wants to practice medicine again!! The courts are saying he wasn’t criminally responsible for stabbing his children, what the hell does that mean? This is a very good example of the saying “The law is an ass” (as in donkey). Look at the happy picture being displayed, the man and his child whom he later stabbed to death, sickening.

Well, yesterday we went for our pneumonia shots, my arm was aching during the 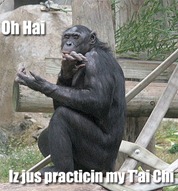 evening but of course Matt didn’t have any reaction. Turns out we won’t be able to bowl today as Matt has yet another medical appointment. Honestly, these days we are living at the offices of one doctor or another. In order to try and help myself feel better I thought I had better get back to my T’ai Chi. Horrors, I have forgotten the sequence of a lot of it so now I have to learn it all over again, serves me right. I really don’t know why I stopped practicing, maybe because there isn’t a lot of room for me, mainly, I suspect, sheer laziness. It’s a pity because I am a firm believer in the efficacy of the system and certainly felt well when I was doing the forms regularly before. Couldn’t resist the picture.

This looks both interesting and tasty. Chicken with lemon always works well.

Tangy, crispy chicken on a bed of roasted potatoes that are surrounded by a 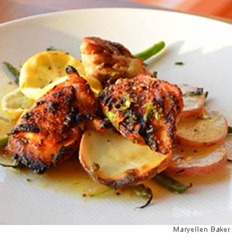 lemony sauce…how is that for a perfect weeknight dinner? Or even a fancy Friday dinner. It is so easy to make it will have you dancing to the table.

Preheat your oven to 450 degrees.

Cut the chicken thighs in half lengthwise, pat them dry, drop them in a bowl and grate the garlic and the rind of 2 lemons over them, then toss with the brown sugar and 1/2 teaspoon of salt. Put the bowl into the fridge and marinate for 10 minutes or so.

While the potatoes are roasting, take your chicken out of the fridge and drain off any moisture. With paper towels, pat the chicken dry (this prevents the chicken from splattering quite as much and really helps it brown much nicer). Heat a large skillet over medium high heat, drizzle in a bit of olive oil to cover the bottom. Sauté the chicken until the skin is golden and crispy (cooks hint, don’t move the chicken pieces around a lot). You will probably have to do this in 2 batches. Do not crowd the chicken, crowds make it pale and sweaty (just like some of us).

Put the flour into a small bowl and mix with a bit of the chicken stock until a smooth paste forms, stir in the mustard and remaining stock.

Take the potatoes out of the oven, pour the chicken stock mixture into the pan with the potatoes. Pile the chicken on top, sprinkle on the chopped thyme. Slice one lemon and tuck among the chicken and potatoes, squeeze the juice of the other lemon all over the chicken.

Pop back into the oven for 20 minutes until the sauce is furiously bubbling and has thickened. Taste for seasonings! Does it need more salt, pepper or lemon? When it is perfect, dance your dish to the table.

O.K. (loooong sigh here), I know some of you will want to replace the chicken thighs with chicken breasts and although it won’t be as crispy or tender you can. Do try to use organic kosher chicken, it will be moister. Slice the chicken breasts into thirds and proceed with the recipe.
TIME SAVER TIP

After sautéing the chicken, drain the pan of most of its oil and use the same pan to sauté a bunch of string beans.