We caught a programme – kind of by accident – on TVO2 (Canadian Public Broadcasting) last night. It was called The Age of Power, hosted by David Dimbleby. A fascinating look at how the Tudors used art as an instrument of power. It particularly showed paintings of Holbein who painted Henry VIII, his wives and his ministers. A fascinating programme. Not sure how many we have missed but 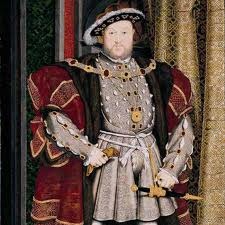 we will certainly plan to catch the rest of them. I just googled, it appears we have missed two episodes. I hope they show them again. Will have to watch out for them, the previous ones were The Age of Worship and The Age of Conquest and the series is called The Seven Ages of Britain. What I thought was particularly funny was the painting of Henry VIII which now hangs in Cambridge university and his armour which was made towards the end of his life. Both were made or painted with large codpieces to emphasise the power of the man. In this copy you can’t see his legs of which Henry was particularly proud apparently. The armour was too heavy for him and he had to wear a special corset in order to support it. By this time he had a suppurating sore on his leg and was not a very well man. I was surprised to be reminded he died at 57, not, to us, very old. The programme went on to show how his daughter, Elizabeth, emphasised her power in a much different way but still very much through art.

It appears the air services between Europe and

anywhere are thoroughly choked up. I think anyone planning to fly anywhere for Christmas might as well go home and give it up as a bad job. The European airports are totally clogged with snow which, of course, they are unused to and the backlog of flights is almost impossible for them to deal with from all reports. The odd plane is getting through, but not many. From Pearson Airport in Toronto they are flying one a day to Europe at the moment. Reports are of more snow and then clearing, but they don’t seem to think they will get the backlog dealt with before Christmas and there will be lots of cancellations. There are people camped out all over the terminals at Heath Row. We contemplated a trip to the UK, I am glad that’s all we did. Glenda Larke is presently at Kuala Lumpur airport hoping to fly to Scotland. I think she is totally out of luck.

On the news this morning, Prince William’s cousin has announced an engagement too. Zara Phillips, the Queen’s granddaughter who will also get married in 2011. She is Princess Anne’s daughter. Her wedding will be somewhat later than William and Katherine’s. I notice, by the way, that although she requested that the media and everyone call her Katherine, nobody is bothering to do so.

Its probably a bit late for baking cookies now, but just in case, here is a healthy recipe from Eating Well.

These healthier pecan butter cookies are made with whole-wheat pastry flour and plenty of nuts. 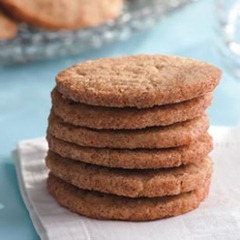