As I mentioned yesterday, I have bad toothache, I was  hoping to get two teeth pulled, but no luck, supposed to go to the dentist today. However, we now have an invitation to supper and things aren’t as bad as they were, so I think I will put it off. In fact I now have an appointment for 8:30 a.m. tomorrow, which, considering its in the next town, is very, very early. Oh well, not as bad as friends, she is having an MRI at 3 a.m. on Sunday morning, also in another town.

I am sure glad I don’t live in London, Ontario, they have been having snow upon snow, upon snow with people being stuck on the highways for hours on end – I know they talked of 300 people, how many of those were stupid enough to ignore the barriers and

figure they could “do it”, I don’t know, but several did apparently. “I have a 4 x 4, it won’t give me a problem”, only it did. We still don’t have much round here and I have decided why that is, the superintendent has a brand new snow plough which, as yet, has never been used. Previously people were hired to plough, but this year, the super is doing it himself, but so far, no joy with his new toy. The 402 Hiway is still closed after yesterday’s storms, they were supposed to get a lot more, haven’t heard if they did. Helicopters ferried 230 stranded people away from the blocked roads although some people stayed with their vehicles. When we have this much trouble in Ontario, you know its bad, basically we are used to handling such weather. Check out the photos here http://www.cbc.ca/photogallery/canada/4226/

Here’s a very different way of serving potatoes over the holiday period.

The addition of delicious sweet potatoes gives a nutrient boost to mashed potatoes. Double it: Cook the potatoes in a Dutch oven rather than a large saucepan. 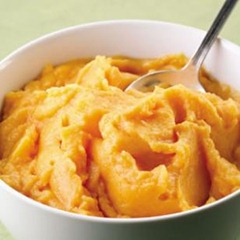