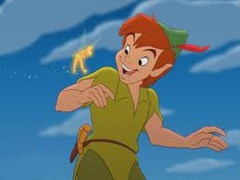 I was a little disappointed in Peter Pan yesterday, I enjoyed it, but when produced in England, it was never done as a pantomime but a straight representation of the story (well when I was a young woman anyway, things could have changed). The slapstick part of pantomimes is not necessary for this particular fairy story. That said, the man who played the pantomime dame was very good and I loved Captain Hook who played it somewhat camp. Very funny. I even teared up when Tinkerbell was dying. Of course they introduced the “call up the kids on stage” section when. after singing a song,everyone got a gift of candies except the last and littleist who eventually ends up with a stuffed toy. I couldn’t quite understand why a young girl sitting near us didn’t go up on stage. We were very close to the steps, but her mother didn’t push her and she didn’t seem to want to go anyway. One thing I did miss, Peter Pan didn’t crow once; I forgot to add Tinkerbell was very well done, a kind of light star flashing around the stage.

The weather spent the day trying to snow and it did succeed a little bit, but not enough to cause any concern with driving or anything else, unlike Buffalo which is socked in. Actually, I am a bit puzzled about Buffalo, they are used to getting stacks of snow, but for some reason haven’t been dealing with it this time and people have ended up spending hours in their cars on the freeways. Not funny that. I don’t know how we personally would manage in such a situation as we don’t carry anything for such emergencies, maybe we should. Not that we drive any distance in the winter and usually not on any major roads. In fact if it snows that much, guess where we stay, snuggly (when the heat works) at home.

I had already published this when I caught sight of a headline that the domain name provider for Wikileaks has dropped them. Matt also tells me that there are a number of European women who are accusing the site owner for rape!!! Interesting, he certainly seems to have raped the American government.

I don’t get colds, I do not get colds, keep repeating. Yesterday I had a sore throat to write home about and was popping throat lozenges like candies. By the evening I was feeling really rough and ended going to bed at 10 p.m. with a couple of Tylenol. Throat seems better this morning, but I think I have a bit of a sniffle. Keep your fingers crossed for me. On the extremely rare occasions when I do get a cold, I don’t suffer gladly. I used to get bronchitis regularly when I smoked, but that stopped as soon as I stopped smoking. One of the many benefits of quitting.

As I ended up sleeping solidly for 10 hours last night, I was a bit late getting up. I was going to type up more recipes from Food and Drink, but instead I am sharing a BBC recipe for chocolate truffles which you can make for yourself or as a delightful gift.

Try making these sensational chocolate truffles as an edible Christmas present - they're so delicious that no one will guess how quick and easy they are.

55g/2oz unsalted butter, cut into cubes and left to soften