Something I haven't mentioned, my Oatmeal Congee breakfasts. What I have been doing is to take a packet of instant oatmeal, mix it with stock/broth and 1 tsp of soy sauce and cook it. You can also add a veg like a few spinach leaves, but mostly I don't bother. I then top it with a fried egg - non stick pan and Pam - and eat. Delicious and it makes a nice change from the usual breakfasts. I have just realised I posted a recipe for Oatmeal Congee a year ago. I had forgotten mushrooms could be used. Must remember that. My post a year ago was about boring breakfasts. When I came out of hospital, I was eating Fibre One every day for a while. Partly because of the cold milk I think, and partly because I wasn't up to thinking about or making myself something different. I do wish I could get herrings which I could roll in oats like my mother did. Or really good kippers. There is also a recipe for Rice Congee on my blog here. However, I think that is a bit complicated for a regular breakfast.

Have decided to defrost the freezer in the morning (Thursday) so, hopefully, it will be nice and clear by the time I return from Costco's in the late afternoon. The car is coming for me at 3:45. Bit late, but better than not at all. The only trouble with defrosting the freezer is, being in an apartment, there isn't a heck of a lot of room. Not only that, I end up with a stack of wet towels to deal with.

For a few years I have been making a dish with sausage and peppers which we always enjoyed. I Googled and found something similar, however, I changed it out of all recognition. It was delicious and we both enjoyed it. 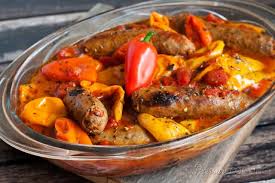 1. In pressure cooker insert, add Rotel tomatoes, then pour some diced, canned tomatoes into the Rotel can. Add everything else except sausages and bell peppers. Stir. Place sausages on top and then add sliced peppers - don't stir.

2. Close the IP lid, select High Pressure. Set timer for 25 mins and press start. When beep sounds, turn off the IP and release the pressure. Once valve drops, carefully remove lid and serve over rice.

3. If you do not wish to use wine, don't drain the tomatoes.