As I was planning to go to Costco on Thursday afternoon, I figured I should defrost the freezer to make more room and to check exactly what I had of what, so, when I got up, I started the process and unloaded all the food into cool boxes plus a few things went in the fridge freezer and so on. Was well under way and came to the computer when the phone rang, it was my driver asking if she could pick me up at 11:45 instead of 3:35.  Wasn't sure about leaving the freezer, but decided it was OK so I agreed and then had to rush around a tad.

Went to Costco and ended up buying a roast of lamb, some lamb chops, fillet steaks and a heap of skinless, boneless chicken thighs. A lot of the Instant Pot recipes I have been making call for chicken thighs. Tammy, my driver, pushed the shopping cart and I used my walker and managed to get to the back of the store but had to sit for a few minutes once there. (Didn't see any motorized carts, might have missed them). Tammy was extremely helpful putting my purchases in plastic bags and such. I ended up with one large shopping bag full which was great. I said to the cashier that at least I hadn't spent $300, her response was "well we'll see you tomorrow, you only bought meat, you need the vegetables". I must say my legs were pretty sorry for themselves by the time we had finished. We were lucky though, got through the checkout quickly despite the hundreds of people there. Never seen it so crowded. We were also lucky to get the closest wheelchair spot in the parking lot.

When I got home, the freezer was well and truly defrosted so I dried off any dampness and turned it back on again. Of course, I ended up with quite a few soggy towels which I had used to catch the wet. Shoved everything back in and endeavoured to update my freezer list at the same time. Then came the fun part of unpacking the chops, steaks and chicken and repacking them in the freezer. At least the roast could go straight in. I do hate having to repack things like that, got Matt to help me with the chicken. He held open the plastic bags and I shoved the thighs in. That way I didn't have to wash my hands every time.

I saw a very nice looking carrot cake (thought it was meringue at first) but I resisted. Spent quite enough as it was. By the time everything was done, I was knackered but didn't have time for a nap as it was getting on for supper time.

There is a theatre in Niagara on the Lake which celebrates the summer season with the Shaw Festival. They do have Shaw plays, but other stuff as well. This year they are doing Brigadoon which is one of my favourite shows. Would love to go and see it but not likely. Anyway, I thought "why don't I have that movie?" well, I do now. Haven't opened it yet, but next time there is an uninteresting TV night we will watch it. Gene Kelly, Van Johnson and Cyd Charisse are the stars. Long time since I last saw it so I am looking forward to it. I've always loved Cyd Charisse. I am not 100% sure if I prefer Gene Kelly or Fred Astaire. Love to watch both of them. In fact watched Astaire the other night - don't remember the name of the film right now but it is the one where he dances on the walls and ceiling of his room.

We had leftovers for supper so I shoved some rice in the Instant Pot to go with them. I always used to end up with a boil over when making rice, not any more. Thanks Ivy.

I had kind of forgotten about this recipe which I enjoyed very much last year. Must make it again. Got to get some endive of course. Because they are so involved in installing a Starbucks in my grocery store, it is not always possible to get what I want. What on earth we want a Starbucks here for I don't know, especially as we have a Tim Horton's close by and that is a very Canadian coffee chain. 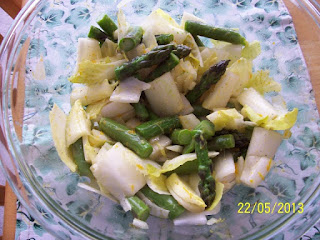 1. Place 1/2 inch of water at the bottom of a 12 inch pan and bring to a boil over high heat. Add in asparagus and cook until tender yet crisp, about 2 minutes. Place in strainer, rinse under cold water, drain, and pat dry with paper towels.

3. Add the asparagus and endive to the bowl with the dressing. Mix well to evenly coat and serve.