Hilary Melton Butcher has been posting about the Towner Gallery and showing pictures of its colourful mural. This made me think of the very colourful museum I pass on the way to the asparagus farm. I didn't know what it was called, it is apparently the Ken Seiling Waterloo Region Museum, and this is why I noticed it.

It took me a while to distinguish the word museum when I was driving past. I have never been in to it, I really should do so one of these days.

Didn't do a lot this morning, but this afternoon we went to the bowling alley. The younger owner is off on his month's vacation now so we talked for ages, his boat is still not repaired from last year, incredible, so they cannot use it for this holiday weekend, Canada Day on Monday. We spent so long talking that Matt and I ended up only playing one game and much to my chagrin, Matt beat me.

One thing we did learn during our talks was that a very good bowling friend had died the previous day. I had heard she had fallen once again and broken bones once more, but I didn't think it would cause her to die even though she was 92 years old. How very sad. I have a photo of us from some years ago when we were in a tournament together with a few other friends. Damned if I can find it, must do some more searching. Tragic though. She was such a nice woman.

Having left the bowling alley, went to the liquor store, I was out of Champagne, sorry, Sparkling Wine, serious that. Then we went to the Victoria St. Market where I stocked up on Italian sausages, bought some Brie too. When we got home I packed the sausages except four which I used to make a Sausage and Peppers recipe in the Instant Pot. This time I tried browning the sausages first, last time I made it I thought they looked a tad anaemic. They did look a bit better in the finished dish.

This is a recipe I picked up last year but haven't tried yet. I really should do so but just hadn't had the time plus I love asparagus just cooked and doused in butter. Monday is not only Canada Day but also the last day for fresh asparagus. Picture me weeping salt tears on Monday night. 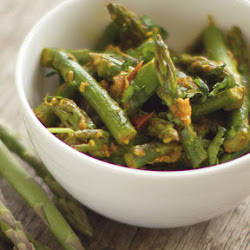 Long green spears of asparagus are not the usual Indian vegetable but with the right spices it really does work.
Hari says
Asparagus is a beautiful vegetable that only has a very short season, but when it is fresh, it’s perfect. Asparagus starts to appear in May until about July and I know it's a vegetable that needs very little to be done to it. The more simply it's cooked, the more tasty it is. That being said I like to experiment and try new things and although this was a tricky one to put with some spices, by using the lovely aromas of fennel seeds I found that it really worked. I decided that keeping it simple with a couple of flavours worked well…so here you have my Asparagus with Indian spices - make the most of it while it’s in season. If you can’t get hold of amchoor, just use a little squeeze of lemon instead.

1. Crush the ginger and garlic in a pestle and mortar to a paste.

2. Heat the oil in pan and on a medium heat add the cumin and fennel seeds.

3. Once sizzling and fragrant add sliced onions with the chopped green chilies and crushed ginger and garlic. Cook for about 5 minutes.

4. Add the chopped asparagus and sprinkle in the salt, red chili powder and amchoor.

5. Add chopped tomatoes and cook for about 2-3 minutes.