I cannot believe it. I get emails from Kraft regularly, today showing all kinds of Hallowe'en goodies. There was a question, Why didn't the skeleton eat these? Because he had no body to share them with. Groan.

Hope your Hallowe'en went well yesterday. We don't really see anything of it living where we do. I believe they do get some kids coming to the apartment door. Bit difficult this year I would think with all the building and tunnels to walk though.

We have been watching The Alien Deep on TV Ontario over the last few weeks. The programme last night was about human expansion. Dr. Ballard who is the main person on this show, said he thinks that us going to live on Mars, etc. is a load of bull and that we will, in fact, spread out into the sea. He is probably right for a while at least. There was a segment about a company converting old oil rigs for human habitation. They can house 300 on the one we saw. This is not the one we saw, but looking for pictures, etc. I came across this one. Not sure if this is the one which is planned to be a hotel or not. But they are certainly converting abandoned rigs for habitations. Presumably the rogue waves Dr. Ballard was talking about a couple of weeks ago, will not hurt these rigs. He points out that there are thousands who already live on the water, i.e. the Asian populations who live on boats in harbours and sheltered areas. I was under the impression that the idea was to build underwater habitations but I guess the technology for that will take a while. He also covered new ways of fish farming being done in deep waters in such a way that there is not a large pollution factor which is one of the present drawbacks with fish farming. They also had someone on the programme taking the opposite side and talking about colonisation of Mars etc. Sadly I probably won't be around to see the upshot of this argument. Although they do say that life expectancy can be as much as 115 nowadays. But then as I have been going round saying to everyone today, as I age, my brain doesn't just wander, it buggers off completely!!!! Got that on Facebook.

This soup is definitely on my to do list. Looks and sounds delicious. I actually have some ground veal in the freezer which I figured would work just as well.

Jok, also called congee, is a rice porridge that’s like the oatmeal of Asia -- a soft, soothing, filling breakfast that can be sparked with add-ins and toppings for flavor and crunch. Before dawn in Bangkok, jok vendors begin the battle to make the juiciest meatballs, the tiniest ginger matchsticks and the liveliest pickled fresh chiles. This recipe, which also makes a great lunch on a chilly weekend morning, is adapted from two cooks: Leela Punyaratabandhu, author of Simple Thai Food, who 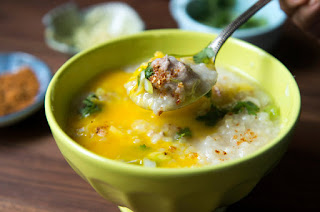 makes a vendor-style, puddingy jok; and Chrissy Teigen, the Thai-American supermodel, who makes a simpler version, adapted from her mother Vilaluck’s home recipe.

2. Pound or grind the garlic, cilantro and white pepper together into a coarse paste. Transfer to a bowl and add the pork, oyster sauce and soy sauce. Mix well, cover and refrigerate at least 1 hour or overnight.

5. From the refrigerator, remove the dumpling mixture and the eggs, if using. Heat your serving bowls. Adjust the heat under the soup so that it bubbles gently. Pinch off pieces of the meat mixture to make bite-size balls, dropping them one at a time into the soup. When all of the meatballs have firmed up and turned opaque, about 2 to 3 minutes after adding the last one, the soup is ready.

6. To serve, scoop a ladleful of soup into a bowl. Crack one egg, if using, into the bowl. Gently ladle more hot soup over the raw egg, covering it completely. After about 4 minutes, the eggs will be softly cooked. Dust each bowl with chile powder and sprinkle with ginger, scallions and cilantro. Serve immediately, passing fish sauce and sriracha at the table. Each diner breaks the egg yolk and scoops up the egg with the soup. Note: Use a very light-bodied chicken stock. If using prepared or canned broth or bouillon cubes, dilute with water until the salt and chicken flavors are very mild